On Donut Sandwiches and Dunkin' Donuts 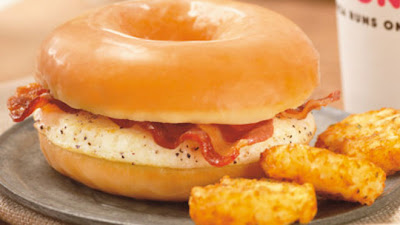 Let me preface what I am about to say about Dunkin' Donut's latest breakfast sandwich creation by saying that I love Dunkin' Donuts.

Dunkin' Donuts in the Eastern United States is like what Starbucks is to us in the West.  They have great coffee and while I was traveling through the Northeast they were my constant stop.  Plus the fact, one day while I was in Portland, Maine I actually walked into a focus study on new lunch items at DD's which were delicious and I got a free lunch for my participation.

I actually can not wait until they start popping up on the west coast in the years ahead as they have planned.

But, that being said, I have to make some comments about their latest Breakfast sandwich and I realize this is a tad bit dangerous because I am writing this before breakfast and I already have a growling stomach.

In case you have not heard this yet,  Dunkin' Donuts is adding, are you ready for this, a doughnut breakfast sandwich, to its national menu this week.

The sandwich, which comes with fried eggs and bacon between a split glazed doughnut, will become a part of the permanent menu starting June 7 to coincide with "National Donut Day."

As shocking as this might be, Dunkin' Donuts says the "Glazed Donut Breakfast Sandwich" is 360 calories, which is less than the 390 calories for the turkey sausage sandwich it recently introduced for people looking to eat better and less than their Blueberry Muffins.

That part really doesn't matter to me, but I couldn't help thinking.  Have they actually ran out of ideas for sandwiches?

I can imagine some guy or gal at Dunkin' Donuts had some extra donut halves and fried eggs and bacon and put it together and said, boo - ya!  There's a sandwich!

It reminds me of when I was a kid, when my mom,  the most unimaginative sandwich maker in the history of sandwich making, used to slather mayonaise on two pieces of bread and put a thin piece of  Oscar Mayer bologna in between.

It didn't matter that I hated both Mayonaise and Bologna.  And with a sandwich that bad, I couldn't even trade any of the other kids at Richman Elementary for another item of food.  Nobody wanted it.

So what's next?  Anybody can make a sandwich out of anything I would imagine.  This lowers the bar.

Like you have a dead catfish laying around.  Salt it up, put some mayonaise on it, and stick it between two slices of pumpernickel...That's a sandwich.

Or take two sheets of a Hershey Bittersweet Chocolate Bar..Stick some anchovies and some mustard in between.  There you go...that's a sandwich!

The possiblities are without bounderies.

I do have a theory regarding marketing on this sandwich too.

It was as if the good folks at Dunkin' Donuts said, "Let's come up with the most outrageous sandwich ever, so bloggers and writers will have to comment on it".  As they say, even bad publicity is better than no publicity.  And it's all free.

When asked whether a customer will also be able to order a sandwich on any type of doughnut at Dunkin' Donuts, such as a chocolate cake doughnut, an official with the company  said, "I'm sure the store will do that for you."

I have no doubt.

I gotta go now...for some reason, I am all of a sudden real hungry and have a hankerin' for a sausage and egg between two rainbow sprinkled donut halves sandwich.