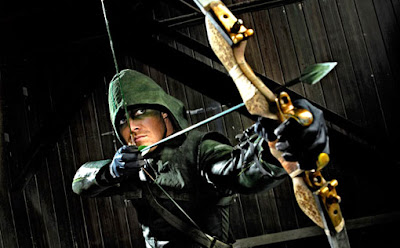 I am not sure how I missed the television show Arrow when it first debuted last October because I am such a sucker for and a fan of old Comic Books and shows based on the Comics.

I think it was a perfect storm of things that led me to watch the series as it embarked into Summer Reruns this past week.

First of all, my daughter introduced me to one of her friends, a writer on the show.  Then, that same day, I'm out shopping and I overheard a Father and son discussing excitingly different aspects of Arrow and how cool this show is.  Then, as if that wasn't enough, I was commuting to work a couple days later and I overheard a person talking about how they were going to get caught up on one of their favorite shows.  You guessed it.  It was Arrow.

So I just had to tune in to see what all this fuss was about.  The buzz was just too loud.

It would be easy to dismiss Arrow, based on the DC Comic Character, The Green Arrow, as a rip-off and cross between Batman, Robin Hood, and The Count of Monte Cristo.

Think about it: The Main Character is a Billionaire Playboy, Is a Vigilante, Robs from the Rich and gives to the poor, dresses in a cool costume with a mask of his own making, and is seeking revenge to right wrongs.

But the fact of the matter is that The Green Arrow character has been around just as long as The Batman, dating back to the early 1940's.  So the real question is, who was copying who?  My take is that there are enough dissimilarities between the two characters to make each stand on it's own and with a little better marketing of the character over the years, who knows, The Green Arrow could have been just as popular as The Batman.

Plus there is that whole cool bow and arrow thing going on too.

This show is highly stylized and action packed and the cast is nice looking and as most CW Shows, skews to the young 30 something crowd, starting with the leads Stephen Arnell, who (Private Practice, Hung) who played the Oliver King/Green Arrow character originally in Smallville and Katie Cassidy (Supernatural).

The comic book is rebooted for the modern era and no expense is spared in the set design and back drops.  It very much has a feature movie feel to it.

But none of that would mean anything without the good stories, well written by the writing team. They move along at a fast, break-neck pace drawing from the old comic series.

The Series has been picked up for a Second Season.