What Marilyn, Elvis, and Lassie Have In Common 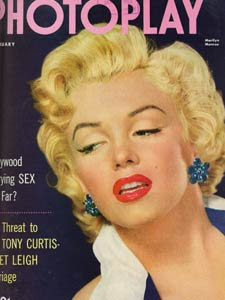 The next thing you know, Marilyn Monroe will be endorsing Clairol Nice and Easy.

Somewhere the King is looking down and smiling.

I was at my neighborhood Seven Eleven a while back, when I noticed a Reece’s Peanut Butter Cup….A peanut butter and banana cream combination which has Elvis Presley’s mug on the wrapper. I just had to try it. I ate one and it was delicious.

As you may remember…Elvis would love to make Peanut Butter and Banana sandwiches and then deep fry them. You just know that some guy in Georgia or Arkansas or maybe even Paula Dean is deep frying these Reeces Peanut Butter Banana Creams.

They deep fry everything in the South.

My good friend from Nashville, Brent, once got too close to the deep fryer and they deep fryed him along with some twinkies.

I then started wondering about celebrity endorsements. Does it really matter if Elvis is on this thing or not? Would I still buy it?

The answer of course is no. Anything with Elvis on it…I gotta get a hunka hunka that. But I digress.

Then I started thinking about other celebrity endorsements. I recently bought some dog food that was endorsed by Lassie. While I was picking up that item, I noticed that Old Yeller endorsed dog food too.

I was sipping latte’s with my good friend Malone, my eight year old Toy Manchester terrier, the other day and I asked him if it made a difference if Lassie endorsed his dog food or not. He responded in his English accent (He’s from Manchester, England after all) “I don’t even know who Lassie is”. I was dumbfounded. “Lassie is your fellow country dog. How could you not know who Lassie is? Plus, she’s hot.”

Then I thought, Oh my gosh. There is this whole new generation of dogs out there that don’t know who Lassie or Old Yeller Is. Malone wrapped up the conversation…he had to go out and chase a cat that wandered into our back yard by saying..”I don’t buy dog food based on the animal endorsing it. I tell you what guvna, I like this food, because it is a big step up over that kibble that taste like cardboard you were giving me last week.”

If I was appointed consultant for the companies I am about to mention, these are who I would use for their Celebrity Product Endorsements: