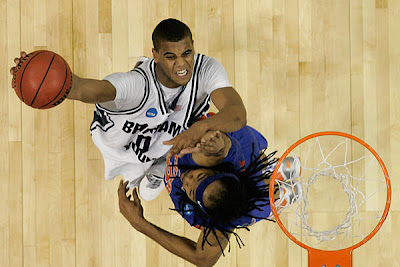 When it comes to covering a sports event, CBS television and their associates really get it right when they do the NCAA Basketball tournament every year.

Regional coverage of the teams from your area, mixed with bonus coverage of other games in progress orchestrated by a team of experts from their headquarters explaining where you are going and giving comprehensive analysis...what's not to like?

The first two big days of the tournament which starts Thursday (we've arlready had two nights of play-in games) are crazy....32 games in two games...and CBS and their partners have a broadcast team and facilities at every site to be at every single one of those games.

About six years ago, CBS started something that I hope catches on in other sports. CBS offered every single game of the tournament for free.  This year every game can be seen at NCAA.com/MarchMadness. And they make money doing it. Ad revenue was up over the previous year again from this service . MLB are you listening? English Premiere Soccer are you listening? You see, the National Hockey League is even ahead of the two aforementioned leagues because they offer all their games for free over the internet. I can listen to any game at any time on the web over NHL.com. But I digress...

Utilizing the same idea, Dial Sports Radio does an excellent job on the radio side with the NCAA Basketball tournament as well but in one sense they do something better...they go to the most compelling games at the time. Last year for instance on the opening day of the tourney, Westwood One didn't stick with the Gonzaga game as they were blowing out their opponent in Portland. Dave Sims and the guys got us out to a close game involving VCU at the Pit in Albuquerque.

I couldn't say that about the CBS television west coast coverage a few years ago. They continued to stay with laughers longer than they should have. Even when you could see the fans leaving the Arenas in droves they refused to leave the game. They would only switch to another game during breaks. This year with farming other games to TBS, TNT, and TruTV this is not a problem. Don't like a game? Simply switch to one of the other channels.

Link and Listen to the Audio and Video Feed of the tournament as well as selected individual games on Bosco Radio: Sports Channel.

Today's wall to wall coverage starts at 9 AM PT and doesn't stop until around 9:30 PM PT. Over twelve hours of NCAA Tournament Basketball and you will be able to hear and see parts of all the sixteen games on the schedule.