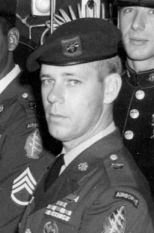 By Jim Helm, The Daily Bosco

I never went. I was never there. I can't imagine it, but at the same time I can imagine it because I have heard so much and read so much about it. I didn't understand it when I was a kid, but I knew it was bad. And mostly, the thing I remember was at Fullerton High School and the relief that I felt hearing that I wouldn't have to go there. We had all thought about it, talked about it, and tried to prepare for it. And then it was over.

When I asked my mom for the $3.00 to buy the bracelet, her immediate response was "No". But, when I explained to her why I wanted it, I must have been convincing because she kind of sighed and got the money out of her purse. You see, $3.00 back then was about like $30.00 today. So imagine your 10 or 11 year-old asking if they can have that much money to buy a bracelet for a missing soldier from some guy on the street. Would you do it? Would you really do it???? My mom did it twice.

They called them POW Bracelets. The first ones were solid brass and etched with the soldiers name and date and location that the Soldier was lost. It was a flat piece of brass that had been shaped into a semi-circle. You couldn't get your wrist into it without bending it open slightly and once it was on your wrist you had to bend it shut again. When they came around a few months later, the new ones were stainless steel. Same engraving, same message. Somehow I talked mom into one of those too.

I remember they wouldn’t let me pick a specific name. You got the name they gave you. But each one had a unique name of a lost soldier engraved on them. That amazed me, one man, one bracelet. So I wore them, I wore them a lot. The first one, the brass one, was overcome by years of surfing and other abuse and wore through the engraving of the name of the soldier after about 10 years. Although I can't read or remember the name, I still feel like I am honoring him by keeping the bracelet. The stainless steel bracelet bears the following inscription:

SVN, South Viet Nam. Wow, it sounds so far away when you are a kid. Now that I am older and the world has gotten so much smaller, it doesn’t seem so far. Still, I can’t help but to do the math in my head. He was SSG at that time so I assume he had been serving for a while. Let’s assume he was 18 or so when he went in and it took a year or so for him to make Special Forces Rank. He was only 12-15 years older than me. The date of 17 Apr 1969 is when he was reported missing.

There was no Internet back then. No other places for a kid to go to research and see if they were ever found. I know from watching the news some were found and they came back home to be reunited with their families. It would be nice to hear he was found too but I wouldn’t throw away the bracelet if that were the case. It’s spent too many years on my wrist and a bunch more in my dresser drawer for me to get rid of it now. And every once in a while when I’m wearing it someone looks at me and then looks down at the bracelet and then looks back up at me and smiles. They rarely say anything. They know what it is and they know that it’s my way to remember someone who gave their life for our Country. After I started writing this I finally decided to do a search for him on the Internet. Here's what I found.

Charles Newton, was born and reared in the small Texas town of Canadian. Seven months after he graduated from high school, he followed in the footsteps of his three brothers, and enlisted in the U. S. Army. Charles completed Basic Airborne School with the 82nd Airborne Division at Fort Bragg, North Carolina, and after a tour of duty in Germany, volunteered for Special Forces and Vietnam.

In November, 1966, Charles joined the 5th Special Forces Group in Vietnam. He attended the Reconnaissance School in Nha Trang, and was assigned to Special Project Delta Detachment B-52.

During his second tour in Vietnam, Charles landed in the hospital at Long Bihn on January 11, 1968. Following are excerpts from a letter Charles wrote to his mom and dad:

Here I am again, flat on my back, however no real harm done . . . got one of the million dollar wounds. Caught a bullet on top of the head Tuesday a.m. and underwent surgery that afternoon. All are amazed that I'm here. I told them, you still can't keep a good man down. Hold all my mail. I should be state side in a couple of weeks.

Charles received a thirty-day convalescent leave, and arrived in his home town. He sported a chest-full of medals, including the Bronze Star with oak leaf cluster, air medal, and three Purple Hearts. He recovered from his wounds, and in May of 1968, married a home town gal. Two months later, he returned to Vietnam.

On March 22, 1969, Charles wrote a letter stating that he would be leaving Nha Trang in one to two days for I Corps (Phu Bai), Northern South Vietnam, and would be gone between thirty and ninety days. Each of his letters, left the reader with a definite sense that Charles intended a long career with the army.

Charles was a Recon Team Leader in Detachment B-52, referred to as "Project Delta." His team included three Vietnamese and three U.S. Special Force soldiers with a mission to conduct long-range reconnaissance into enemy occupied areas. These missions normally lasted for a three to five day period.

On April 14, 1969, his Team infiltrated Quang Nam Province in South Vietnam, and on the 16th, encountered enemy contact, but continued the mission. Shortly after noon on April 17th, the Team reported it was in contact with the enemy and requested air support. The last radio transmission heard from the team stated, "we're in a stream bed and hit bad".


On December 16, 1969, five months after Charles Newton was declared missing in action, the U.S. Army promoted him to Sergeant First Class.

A Bronze Start with Oak leaf and three Purple Hearts. Somehow I knew he was a tough guy. 82nd Airborne were the bad boys they dropped in to clear the way for our other men. Project Delta were Special Forces Units of 5 or 6 men that went deep behind enemy lines. It was nice to hear that he was from an Army family following in his brothers footsteps. But the best thing was to read the letter home and to get the slightest feel of who he was and how much he loved his family. The sense of humor he used to tell them he was wounded but OK and would be returning home soon.

You don’t have to have a bracelet to remember them. There are many ways you can show your thanks for our soldiers. My wife can’t get through the start of any sports program without a tear in her eye if the Color Guard is performing. It’s because she remembers and she is proud and thankful for them. Others may stop in the airport to shake the hand of a retuning soldier to thank them for their service or to let a deployed one know that we pray for their safe return and thank them for putting their life on the line for all of us here at home.

I didn’t go....I was never there.... I didn’t know Charles V Newton. But I will always have this bracelet to remind me of the ones that did.