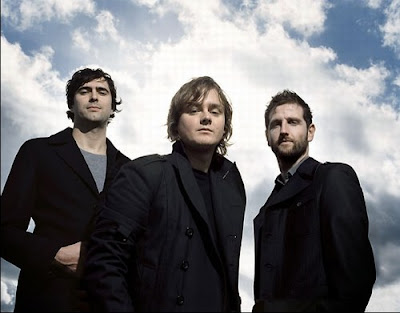 Pop Group Keane shares a gorgeous set of new songs to celebrate the release of their latest album, Strangeland, on the Morning Becomes Eclectic radio program in the 11 o'clock AM PDT hour this morning (Tuesday May 8).

Reflecting on a lifetime of music, MBE host Jason Bentley is still listening carefully, with a youthful anticipation of that next brilliant sound. "I have always been fascinated by the power of music, from translating the most intimate moment to commanding the masses, it's a profound connection between us all. It's with respect for that connection that I approach my work every day."

For Jason, that work includes serving as Music Director of KCRW and host of their signature program Morning Becomes Eclectic, as well as a distinguished career as a Music Supervisor for film and advertising, and an exhaustive DJ schedule in bohemian Los Angeles.

Bentley is a tireless champion of new music and culture with an influence close to home and around the globe. "I think being passionate about music is fundamentally what enables me to be successful. I'm driven to share that excitement, whether it's DJing at an art exhibit, working on a film project, or broadcasting from the radio station every day. It gives me a sense of purpose."

That purpose has taken shape growing up at KCRW, beginning as a phone volunteer the Summer following high school, scoring a nighttime air shift in 1992 with Metropolis running for 16 years and, more recently, being promoted to Music Director of the station. Jason is no stranger to the business side of music, having worked in A&R at Maverick and Island Records, music supervising the Matrix trilogy, and consulting for countless advertisements, video games, and live events.

"As a natural extension of DJing, music supervision allows me to apply my ideas to different formats. The reward is in seeing things develop and flourish in the mainstream." One of his most recent projects is the highly anticipated TRON Legacy score, on which he worked with Daft Punk. "I think of myself mostly as a facilitator, coming up with ideas, discussing them with artists and managers, and hammering out a way forward." Jason's DJ itinerary is as busy as ever, with recent sets at Coachella, elite industry Oscar parties, and underground dance clubs. "I like to stay in touch with the artistry of live DJing along with everything else. It's such a creative wellspring for me."

While acting as the music director of the station where he’s grown up – literally and figuratively – is a challenging task, Jason is devoted to leading KCRW’s team of talented DJs into a new era.

Morning Becomes Eclectic can be heard each weekday starting at 9 AM PDT by the following methods: On KCRW 89.9 FM in the Los Angeles ares or worldwide at kcrw.com. For your convenience we have added a link in our sidebar under Bosco Radio: Arts and Entertainment.