Pro Baseball In My Hometown? Not So Fast 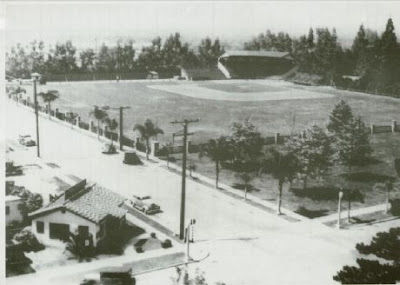 One of the subjects that is near and dear to my heart as a life long resident of the City of Fullerton, CA is the rich tradition of the game of baseball that my home city has. This goes back to the turn of the 20th Century when a young future hall of famer Walter “Big Train” Johnson pitched for my alma mater Fullerton High School. That tradition continued all through the 1900’s. In addition to Johnson, Major League Hall of Famers Floyd “Arky” Vaughn and Gary Carter, and great diamond stars like Del Crandall, Steve Busby, Keith Ginter, DC Olsen….so many more that it would fill volumes….hailed from the city of Fullerton.

All of the aforementioned players, many other great baseball players, many of my good friends and my son and many of his friends all have one thing in common. We have all played baseball on the same field in Fullerton…..The park that is now known as Amerige Park .

Amerige Park as a baseball park has had so many great memories it would be hard to list them all in this space. For instance, it used to be the home field for Minor League Baseball Spring training. The Portland Beavers and the Los Angeles Angel minor league teams used it for spring training and preseason games in the 30’s and 40’s. On a couple of occasions it was the host of a big exhibition game like the time the Cleveland Indians played Portland or the Chicago Cubs played their farm team the Los Angeles Angels. And for many years it served as the home field for Fullerton High School and Fullerton College great baseball teams of the past. Even to this day, the frosh-soph baseball team at Fullerton High uses Amerige for it’s home field.

Amerige Park has been used as a movie set more than once. It is the star of the 40’s film “Alibi Ike” where it doubled for Wrigley Field. It was also host and star of other films as well.

One of my favorite personal memories of Amerige Park is riding my bike as an eight year old boy in 1968 from my home in Fullerton (by Richman School) to the park. I was a member of the Dodgers Pepsi Fan Club and some of the Dodgers came to Amerige to sign autographs and give away tee shirts and other Dodger treasures. I didn’t even mind if Pepsi and the Dodgers sent their rookies fresh from Albuquerque. That day I would get my glove signed by Bill Russell, Billy Grabeckiwitz, Davey Lopes, and Steve Garvey…before they all would go on to have huge careers.

Ever since I can remember, Amerige Park has hosted PONY Baseball. This is the league where the kids play after Little League and before High School. It has also hosted the Colt League games for high school age kids for the summer and our outstanding American Legion teams over the years. It has also hosted some wonderful High School baseball tournaments as well where the best teams from all over Southern California and beyond come to Amerige and Fullerton to play each other during the spring.

But the biggest of all the tournaments that Fullerton’s Amerige Park and Fullerton PONY baseball hosts is the PONY Tournaments during the month of July. For many years it has been a tradition for Fullerton to play host to teams from Southern California, Northern California, Hawaii, Washington, Arizona, Utah, Oregon and the rest of the Western United States. Two seasons ago, for the first time, since Fullerton and Amerige Park have done such a wonderful job, the PONY organization named Fullerton’s Amerige Park as the host site of the PONY World Series. Teams from all over the world and country converged on Fullerton for the World Series.

Our guys that run PONY baseball and Amerige Park have done such a wonderful job over the years of hosting these tournaments it has become a great event to watch and a wonderful place to watch. Our guys keep the fields in pristine condition. It has become a tradition for me to go out the first morning before the first game of the first tournament to go out and talk to my friends Ralph and Jess and stand on the field and walk with them as they chalk the lines and just marvel at their work.

Most golf course managers would be green with envy to see this field on that day….usually around the first of July. And Amerige Park is just a wonderful place to watch a baseball game anyway. It has great sitelines (there is not a bad seat in the house) and it is just a quaint downtown ballpark with the excellent view of Fullerton City Hall in left field, the police station in center field, the sound of the freight trains rumbling by the right field line. I love it….especially on a Mid –summer night after work…relaxing eating a carne asada taco from the great food stand in the park and a coke and watching the great baseball of the PONY All-star tournaments.

I say all of this because I have mixed emotions. I understand, and have understood actually for the last couple of years that the minor league team the on-time Orange County, once again, Fullerton Flyers wants to use Amerige Park as their home field and are in negotiations with the city to start playing there as soon as possible…possibly as early as this season when the Single A Independent Golden Baseball League starts at the end of May.

I like the idea of minor league baseball in Fullerton. We deserve a minor league team. This is a baseball town afterall. For the first few years the team was known as the Fullerton Flyers and under the direction of GM Ed Hart, a guy who grew up in Fullerton and lived in Fullerton all his life, the team had a real sense of community. But that has all since changed.

The new management and ownership renamed the team the Orange County Flyers and even though they have played at Cal State Fullerton’s Goodwin Field I feel like they are trying to lose their Fullerton identity. Ed Hart, the wonderful hometown GM was let go after his second season. The heart of the team was ripped out. Then the team, last season, pardon the pun, took a flyer. They sat the season out when their lease ended at Goodwin Field. Or as I like to say, they pouted when they didn't get their way.

Now, because you can throw a baseball through the stands at Goodwin Field on game night and not hit anybody, and it looks like no game is being played there when there actually is one because of the very sparse crowds, the management got the idea that they should probably move to a less expensive and smaller venue like Amerige Park. They even want to build a new 4500 seat stadium in it's place, which is ridiculous when you consider the fact the team has probably never drew more than a thousand fans to one game except the night they had the concert featuring Hugh Laurie and Teri Hatcher.

I say no to a new stadium and keeping the existing stadium as it is would be fine, except the following needs to happen:

The Flyers need to once again be called the FULLERTON Flyers. You will be playing in the heart of Fullerton. You need to represent FULLERTON. (To the team's credit, they are actually doing this...but I surmise it is a ploy to get the city's favor)

The Flyers will not be allowed to make any modifications to Amerige Park and stadium whatsoever. This includes putting in showers and locker rooms. You guys want a shower after the game…you can take one at home or your hotel.

The Flyers will need to organize and participate in free weekly baseball clinics for the youth of Fullerton.

The Flyers will need to maintain the high quality of the field and Stadium. Any damage to the field or stands will result in a fine from the city of Fullerton plus the Flyers will be responsible for fixing the damage.

All concessions, field operations, and stadium management will be run by employees of the city of Fullerton and the Flyers will be paying these salaries and wages.

That being said...let the games begin.