The Days After The Worst Day 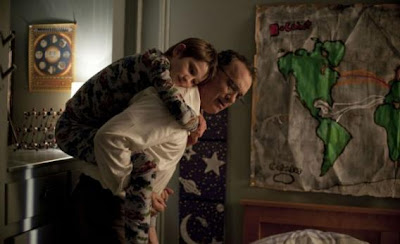 With the war in Iraq over and the country turning its attention to politics and the economy, it may be an odd time to be drawn back to the events of 9/11 or as young Oskar Schell refers to it, “the Worst Day”. But this story isn’t really about a national tragedy or a war or even the day that changed the world for many of us. It’s the story of a journey, determination and resolution.

You won’t necessarily enjoy this movie, that is, you won’t walk out of the theater with the usual Hollywood, warm fuzzy, everything’s tied up in a ribbon kind of feeling. I’d go so far as to say if you’re making an evening of it, wait and eat after the movie because your stomach may ache a bit as the story unfolds.

Oskar Schell is a young boy, incredibly intelligent but challenged by Asperger’s Disorder. His father (played by Tom Hanks) is devoted to him and supports and challenges his abilities particularly with serendipitous exercises that they refer to as Reconnaissance Expeditions. A series of clues that require young Oskar to not only use his deductive talents but to ask questions of the strangers and socially engage himself; a hurdle for people with Asperger’s. It would seem that all of this comes to a tragic end when his father dies in the collapse of the World Trade Center.

Oskar’s trouble coping with the loss of his father, compounded by his condition, furthers the emotional distance between his mother and himself that seemed to exist prior to the tragedy. Her own grieving only works to reinforce it. Eventually he discovers a key in his father’s closet which he takes to be a clue and the initiation of a final Reconnaissance Expedition to find what it unlocks. It is his own self-admitted attempt to keep the spirit of his father alive and part of his life.

The journey is the bulk of the story, culminating in this young boy’s realization that his father is gone. It’s an emotional realization as is most of the journey. And like many journeys there are people met along the way, a travelling companion and a conclusion that isn’t quite what’s expected.

The chronology jumps from time to time back to events in Oskar’s life prior to and including 9/11. While occasionally a bit disorienting the thread of story is fairly easy to follow and since it’s told primarily from the boy’s perspective it makes sense this way. The editing, score and camera work lend themselves to a certain intensity that reflects Oskar’s drive as well as a sympathy and concern for the character as he travels throughout the five burrows of New York on his quest. There’s distinct uneasiness in this and the fact that you’re not quite sure where this is all going that can easily manifest itself in that stomach ache mentioned earlier.

Oskar is aptly played by Thomas Horn whose previous experience in front of a camera consists of being a record breaking teen Jeopardy champion. His performance, while not exceptional is certainly credible. Noteworthy as a debut and quite an effort to follow if he decides to pursue acting as a career. Now, at 13, he maybe someone to watch for in the future.

Tom Hanks briefly plays Oskar’s father Thomas Schell. Ideal as the everyman that we all love to watch, his role is rather limited to the initial paternal encounters and a few flashbacks to develop the relationship between father and son that is the foundation of this story.

Sandra Bullock plays the mother with a reserve and restraint appropriate for the part. This part could’ve been schmaltzed up with a mother-lode of emotion but credit goes to Bullock and the director, Stephen Daltry, for opting for the less-is-more approach. Whether it be the Asperger’s or her own grieving, the character of Linda Schell is portrayed with a stoicism and reserve so as to allow her son the space he needs to come to terms with his father’s death. This reserve ultimately is appreciated by the son (and the audience) and reveals an insight and understanding that is superbly played by this wonderful actress. She is aged a bit for this part which facilitates not only the credibility of the character but the actress’s potential playing, older characters with substance.

Max VonSydow deserves recognition, not that he needs it, for his excellent performance as Oskar’s “travelling companion” on his expedition. He plays an elderly mute who communicates with “yes” and “no” tattooed on his hands, a notepad and, most exquisitely, with his facial expressions and body language. And not to forget John Goodman who checks in with little more than a cameo as the doorman for the apartment building, and verbal sparring partner with young Oskar.

With all this talent from these movie stars, and I refer to them in that fashion to emphasize the magnitude of their celebrity, it is to their credit as well as Daltry’s that they didn’t suck all the oxygen out of the room and leave little space for the principle character to operate. In this, they kept their star power on simmer and let Thomas Horn’s performance carry the load that it should.

This time of the year is awash in feel good movies and I suspect that there are even a few out there that are worth seeing. Extremely Loud and Incredibly Close is certainly not in the category of a Feel Good Movie. It originally came out on Christmas Day which I suspect it may have something to do with the Academy Awards but regardless it’s definitely worth your time and money. Like Oskar Schell, you may not be smiling at the end of the story but you’ll leave with a sense of satisfaction, enriched for the time spent which is hard to find in theaters this time of year.