How the Upscale, Suburbanite 99% Live 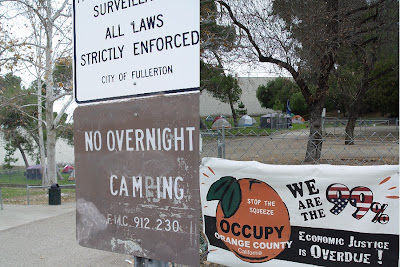 Can it always be true that real disasters never strike Fullerton, or do we have one in the offing? I joked to a grim faced police officer about how the sign used to say "Brea Wonderful" before they moved in, he actually laughed. Cyclists stopped for a look, then not seeing the point in sticking around with just the 12 tents and one visible person. The Brea Dam has been invaded by the lowest common denominator, to which I facetiously say "God Help us ALL!" Once again, a small group of people declares that they are going to push the rest of us around. Once again, I'm saying "Like hell you are."

I've followed the news. What started out as modern day "Hooverville" settlements (Named for the President at the beginning of the Great Depression) has taken a greater resemblance to the "Rookeries" of 18th-19th century England. Rioting, vandalism and stealing in various communities, extortion/"Protection Racket" activities in San Diego and other cities, even a shootout between residents, or should I say "Occupiers," in Oakland. This is worse than anything the people in the various Hoovervilles did, but most of those people didn't want to be a bother. Now it's the city of Fullerton indulging them as other communities have. You don't have to look too carefully at the photograph to see another illustration of people bending over backward to look the other way as the Occupy Movement does as it pleases. In case you didn't catch it, the sign says "No overnight camping," yet they'll be allowed to stay until they've simply bullied too many people to tolerate anymore. Then they'll scream it's "Illegal" to protect yourself from them.

If I don't sound unimpressed, that's because I'm not. I see absolutely no effort to accomplish anything by these people and their "Movement." Ah, the romance of disrupting press conferences, of screaming "That's ILLEGAL" about perfectly legal things that go against you. Of aligning yourself with a group that symbolizes itself with a mask of a possibly retarded fall guy whose body the conspirators had intended to leave in the rumble when they blew up parliament,or if he escaped would have flee the country to lead the trail away from themselves; only to have him brag foolishly to the guards what they were up to and name names. Just as later writers would convert Guy Fawkes into what has been referred to as an "Acceptable fictional character," so do the Occupiers try to rehabilitate their image to that of freedom fighters rather than squatters. But if they didn't destroy things, I'd say they weren't even doing squat. I'm not working much at the moment, I'm occupying myself going to school, trying to help the school to deal with being understaffed and the students to deal with being under prepared. Yeah, life's tough all around. I can tell Occupiers about jobs they can get if they're willing to get just a little bit of training to prepare for it, jobs that have a way of going unfilled because people won't bother. I'm sure they'd get mad. I say that I alone mean a whole lot more to America than the entire Occupy movement. If the truth were told, how much economic injustice have the Occupiers been the cause of in their lifetime?

I recall the howling when the "Dot Bomb" Internet economy collapsed. All these people who'd flunked out of college and got well paying jobs not getting any work done were now unemployed, with no skills to get another job. There had been a lot of us who'd needed jobs that had learned to do the things that could have kept all those companies in business, but these do nothings had wanted to protect their phoney baloney jobs, so they'd only hire their own kind. How am I supposed to be sympathetic when I'm reading an article that included the whining of a ne'erdowell who'd stumbled into a job where he'd wound up interviewing me, became wide eyed with panic as I told him how to solve problems he was just telling me I was just going to have to live with while I worked there because not even HE could solve them. Do you get where my 100% scores on all 4 tests they had me take didn't get me the job, while others there who'd peaked at 75% and fell below 40% on one or two others were given start dates? The real "Economic Justice" would have been if I was reading his published "Poor Me, POOR ME" on a break from my first ever permanent full time job. What have the occupiers really done to solve their own problems? I've only caught where they complain, steal and threaten people. I can tell you I've been as desperate as these Occupiers if not more so, I've never behaved as badly as they do. I've gone to the trouble of becoming someone who really should have access to the real job I've never been able to get.

My thoughts will always go to the homeless man trying to raise his son and get off the street who went on to become a millionaire and the subject of a film starring Wil Smith. There is the real courage to me, actually trying to do something himself rather than pouting until SOMEONE ELSE fixes it for him, a la Obama health care. What is the badly misidentified "99%" really doing other than alienating even the 19% that once supported them? (Insert answer here, if you can.) While Guy Fawkes spun quite a fanciful tale of the activities of himself and his conspirators, there was never any proof they did much besides collect gunpowder. Even the extensive tunnel he told of digging never existed. As imaginary as the enttitlement the Occupiers feel.

I recall a little 'Compare and Contrast' editorial in the 'New York Times' on Irish Republican Army terrorist Bobby Sands after he'd starved himself to death on a hunger strike in prison, a place he'd been several times before at the age of 26. "Mahatma Gandhi used the hunger strike to move his countrymen to abstain from fratricide. Bobby Sands' deliberate slow suicide is intended to precipitate civil war. The former deserved veneration and influence. The latter would be viewed, in a reasonable world, not as a charismatic martyr but as a fanatical suicide. . . ." Oh, Sands was even elected to Parliament, yet instead or taking office chose to kill himself. Thus escaping the pressure of having to actually accomplish something.

To the rest of the world, most Americans are the 1%. To be what is considered "Poor" in America is to be unable to replace that TV you bought at a garage sale (Or possibly did buy new) with a big screen, to wonder how you'll get a new washer and dryer when those you have wear out. If the check the government gives you isn't enough, you make a run to the food bank and stop on the way home where they give you dinner ready made. The homeless are allowed to leave their electronics, the DVD player, portable computer that can access the free WiFi (And used WIkipedia during the blackout, as I did to fact check this) at the coffeeshops, etc., to charge at local businesses while they run to their mailboxes to pick up their celphone bills and their monthly checks. If you don't believe any of that, go volunteer with the organizations working with these people and you'll find out. In short, the Occupiers socalled 99% are included among the world's wealthiest. I won't be satisfied until I hear Occupiers admit "We ARE the 1% upper class." If you really want to hear someone scoff at the Occupy movement, talk to a "Foreigner" (Immigrant, legal or illegal) who works at fast food or a convenience store after Occupiers have been in there demanding to be fed and blocking the doors until they are. These people will tell you they'll take being homeless in America.

So Steve, whom I hope is reading this, told me of his childhood adventures at a campground where his family spent the summer in a tent when Dad was out of work but had a teaching job coming in the fall. I guess a modern "Condo Tent" has gotta beat the built from what they could find shanties of the 1930's Hoovervilles. He talks about that as a happy memory. I wonder if the Occupiers even care about their socalled "Movement," or if it's all just a facade. As I was taking my photographs, a family of cyclists stopped to look at the encampment. They asked where all the people were, I told them I had only seen one man since I'd arrived. They asked about the planned activities, how many more were coming, etc., I think they took my responses as coming from a member of the camp. Who knows, if the one man had come over he might have said the same thing I was saying: 'I don't know.' Obviously there would be no vicarious thrill here, they rode on.

As they did, the grade school age boy vented his disappointment. "This is the worst Occupy ever." If that is what makes it the worst, I just hope it stays that way, we don't need their kind of disaster here. It's not worth having them do anything "Better."