Getting You up To Speed For the Indy 500 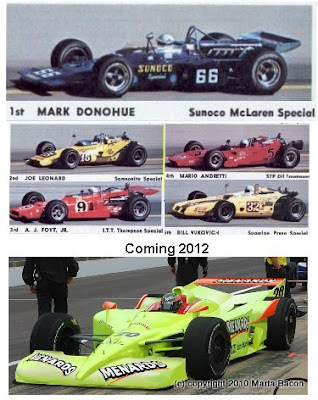 By Doug Vehle
Special For the Daily Bosco

Last July it felt like that scene from 'Casablanca,' as I said: "I am shocked, SHOCKED to learn of Dallara continuing to be the spec (Specification) chassis for the Indianapolis 500." While I'd held out some hope that the Italian company would lose to our local Swift Engineering and that these innovative cars they had designed would be built in South Orange County, it came as no surprise that revolutionary lost out to evolutionary, especially since the not quite next generation car chosen will be built in a new facility in Indiana, near the home of the Indianapolis Racing Leaque that sanctions Indycar racing. What would have been a surprise would be if they'd given me what I REALLY wanted: A return to the days of 'May the best design win,' or at times the best even losing to the not so good, as the crowd cheers wildly for the underdog.

Because that is the real excitement of racing, man vs. man in the form of man with plenty of everything vs. man trying to make up the gap between reality and expectation in the battle of machine vs. machine. The turbine may have been the fastest car at Indy for several years in the late 1960's, but it would never win. It sure did make it exciting. Just as it was exciting to see a 1971 race in Pocono Pennsylvania with the top 5 finishers in 5 dramatically different cars. 4th place was taken by a conventional engined descendant of the turbine that broke 9 laps from winning the 1968 race. A 6 year old design from Orange County that won one quarter of the races that year was not represented in that finish.

And that early 1970's era was my choice for the most exciting time in Indy racing, culminating in some 40 chassis' of at least 8 new designs arriving for the 1972 Indy 500, though 13 of the 33 starting spots would be snatched by 9 types of old technology, each highly modified of course, as some of the new cars just didn't work out. Some of those old cars required some last minute modernization right at qualifying time. Still a stunning development, the old cars had always continued to be recycled and sometimes win the race literally up until that year. In fact, the dominant new design the year before that prompted the revolution had settled for 2nd place in the '71 500 as Al Unser Sr. drove his "Didn't have a chance" previous years winner to back to back victories in '70-71 when McLaren driver and Revlon heir Peter Revson fumbled away the top spot.

But the 9 hybrid concepts of old/new were never a factor in the '72 race. And again, the dominant new Dan Gurney Eagle chassis from Santa Ana let victory slip away, as the updated McLaren finally had its' day. The Eagle won 4 of the 10 races that year, the new Parnelli design won 3, the new McLaren won only at Indy while year old McLarens' won twice.

For the following decade, it would be normal to see 10 or more designs make up the starting lineup, with the individual cars often customized by teams to further separate them. But by 1982 more than half the field would be running the March Engineering car, with the popular alternative being to run an older Penske car until that team also had some of the 27 March cars in the 1985 500. The era of the dominant chassis had arrived.

Lola, Reynard, GForce, there would be various makers who would take turns putting most of the cars in the race and usually come out on top, but in 1998 Eddie Cheever gave Dallara their first Indy 500 win, by then there was only 2 makes in the race. In 2005 Danica Patrick made her rookie run in the endangered Panoz design that had managed to win the race just the year before. Patrick would be the final driver to lead the race in something other than a Dallara, finishing 4th with her teammate Vitor Meira in 2nd, the last strong showing by a non Dallara as well as the last time there would be more than one engine represented in the race. In 2007 3 of the old Panoz chassis started in the last 2 rows in their final appearance, bringing an end to the time of design and innovation at Indy. It's been quite a while since the Dallara itself looked any different, that will change in 2012, at least a little. There's been talk of allowing teams to create "Aero packages" that would vary the look slightly, but that has been posponed. So far there has been a few companies offering to sell these packages to as many customers as possible, which would lead to teams all gravitating to the best available package.

There's always moments when people hold out hope. When the rival Champ Car World Series adopted a newer Panoz as a spec car in 2007, fingers were crossed for a rumored merger to reunify the two racing series and a head to head matchup between the 2 designs. Instead in 2008 the Champ Car teams were handed the old Dallaras from the Indycar teams who were then given new Dallaras to race, and Indy racing remained one car/one idea. This seemed to make that official. Even the return to Indy racing of Lotus, who won in 1965 with Jimmy Clark and in 1967 with A.J. Foyt calling his rebodied Lotus a "Coyote," is with the traditional green and yellow Lotus colors on a Dallara.

Swift Engineering, who offered not just one but 3 variations on their entry for the competition, currently builds cars for other spec racing series, more one and one only racing. They were showing off their prototype for a UAV (Unmanned Aerial Vehicle) at the Long Beach SAMPE (Society for the Advancement of Material Engineering) show in Long Beach days before the Indy 500, a departure from their normal focus on their racing technology. Dan Gurney has departed racing to build UAV's, so there are no more Eagles.

These days building a racing car takes some serious engineering, which takes serious money, leaving the company to want to sell ALL the cars running in a series. How I long for stories of the guy who needed a ride, so his neighbor built a car in his garage for the 1983 race. Or Clint Brawner, poised on the edge of eternity, tearing apart a wrecked Brabham Indycar in late 1964 to learn what he could about how a rear engine racecar was constructed, as the front engine roadsters he was accustomed to working with were fading into history. Brawner Hawks would carry Mario Andretti to rookie of the year at Indy in 1965 as well as 3 Indycar titles in the 5 years he drove them, capped with an Indy 500 victory in 1969.

So it's a shame that the powers that be at Indy have continued to go back on their word to broaden the scope of technology in the Indianapolis 500. This time, again, there was some discussion of just letting the designers race for it, maybe allow all the entered designs to compete. There's even talk of opening up to an additional engine manufacturer. But for now, the only difference is in the paint job. Thank God for sponsorship. Although that's fading away, also.