The Reappearance of Bentley Little 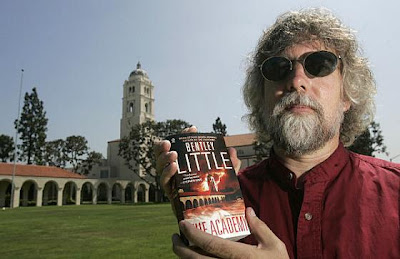 A group of UCLA students make the long drive to Nevada to attend the Burning Man celebration. They let loose and enjoy the party atmosphere around them. One morning, Gary, one of the students, awakes feeling drugged. He looks around find his girlfriend, Joan, is missing. His friends, Reyn, Stacy and Brian, awaken, all sharing the same drugged feeling. And thus starts the latest novel, The Disappearance from Bentley Little.

The friends search the festival grounds and cannot locate Joan. They all need to get back to campus for class, so they head to the local police station and attempt to file a missing person’s report. Informed that a report cannot be filed until Joan is missing 48 hours, they reluctantly make the drive back to campus.

Once they arrive on campus, they decide to file a report with the local police. The police arrive and inform the group that Joan isn’t a student at the university. They log onto Facebook and discover that not only has her student record been deleted, but so have her social media accounts.

Gary begins to dig a little more into his girlfriend’s life and unveils a dark past. Soon he and his friends are all in danger, running from those who are desperate to remove all traces of Joan’s life in the “outside.”

The Disappearance is a bit of a departure from the horror fiction for which Little is known. That said, it still has the essense of a horror novel. It’s full of chilling suspense, intensified by extremely well-developed characters. Looking at other reviews, “fans” of Little criticized him for this shift in his writing, but he is applauded by others for his versatility.