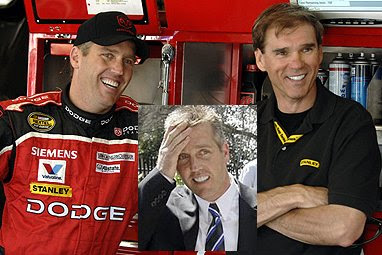 By Doug Vehle
For the Daily Bosco

". . . . It could be big in all kinds of different ways, and all I needed was [NASCAR's] support, and to work with me on this. They could have had races sponsored and tracks sponsored and I could have been with one of their big teams with a big sponsor and I guess they don't want that. . . ." Thus unspooled the story of the mysterious sponsor courted by suspended NASCAR driver Jeremy Mayfield. A struggling competitor who rarely won a race when at his best, Mayfield has fallen on hard times in recent years; not the kind of driver you'd expect to be courting bigger money than even the championship teams can find in this tough economy. But Mayfield claims he could save the declining fortunes of NASCAR, if they would just play ball. This while Mayfield is banned from the track after testing positive for methamphetamine. While many agree with him that the validity of the tests of what's in his system can be held in question, Mayfield seems increasingly to fail the more telling test of what's coming out of his mouth.

If you had to be suspended by NASCAR, it couldn't have come at a better time than it did for Mayfield, at least as far as public sympathy is concerned. NASCAR officials had been on a tear, threatening track owners, dishing out outrageously large fines for minor infractions, including to one impoverished team for using an engine so long the cylinder walls were worn away to be slightly larger than spec. The fine put the team out of business. So when Mayfield was suddenly suspended after a test that the players unions of other major sports don't allow, many participants lined up in his defense. They were quickly silenced as Mayfield drowned them out. Embarrassingly so.

It's one thing to not like your stepmother, maybe even to blame her when your Father chooses to commit suicide. But when she decides to claim, right or not, that she has watched you using methamphetamine, you should try to weather it with some dignity. Don't start, years after the fact, to accuse her of the murder of your Father. "She's hated me since my dad got killed because I won't give her any money." Mayfield had much to say about the widow of his Father, referring to her as "Trash," etc. The biggest being that he could prove she had killed him even though he had allowed the police to rule the death a suicide 2 years earlier. But hadn't we heard such acrimony from Mayfield before?

"[Ray] and I are great friends and will be great friends no matter what happens in the future," Jeremy Mayfield said back in 2006. This was days before he would file a lawsuit against car owner Ray Evernham. By then it was already certain they could not be friends, Mayfield was suing to reclaim his seat driving for Evernham. He had been fired after an early race incident where he slowed the car dramatically then inexplicably brushed the wall when no other cars were present. This after recent races where the driver had suddenly brought the car into the pits with such complaints as a flat tire, when in fact there was no flat tire. After the staged wreck, Mayfield is said to have exited the car 'Cheerfully,' strange behavior indeed for a driver who drops out of a race.

At the time both Mayfield and his wife were reportedly telling others that Mayfield was deliberately turning his car into a 'Back Marker,' at a time when his teammate Kasey Kahne was the winningest driver in the NASCAR Cup Series. Mayfield was blaming his struggles on the owners' new 'Relationship,' on which Mayfield also blamed the marital problems of Evernham. All the while whining that Evernham was unfairly trying to blame him for the troubles. Rumors at the time were circulating of huge offers being made to even modestly competitive drivers by Toyota, who was about to join NASCAR the following season and wanted at least some prospect of winning a few races right away. Mayfield was known to be shopping his services to teams that were switching to Toyota, looking for one of these sweet deals, even though he had 3 more years in his contract with Evernham. But there was still half a season to go before Mayfield could hope to land the money, the firing came a little too early.

Mayfield won an injunction forcing Evernham to hold the car out of races without Mayfield, forcing a settlement that is believed to have driven Evernham out of business. Evernham was once the crew chief for the NASCAR Cup series 5th all time winner, Jeff Gordon, who in those few years won more than half his career victories as well as 3 championships before moving on to ownership. If not for the problems with Mayfield, 2006 would have been his greatest year as an owner. Evernham wound up trading what remained of his operation to Petty Motorsports at the end of the 2008 season for a small ownership stake. Mayfield, meanwhile, would have short, acrimonious relationships with several owners as he struggled unsuccessfully while qualifying for less than 1/3 of the races, playing a role in another going out of business. Finally he started his own team for this season, trying to support it through his SmallSponsor.com, where for $299 you can receive a "Sales Executive Package," and go out and try to sell sponsorship for his car. People can be so quick to talk about the harm a junkie does to himself, what about the harm done to others?

Mayfield's stepmother's claims dates back to before all of this, back to when Mayfield was wearing out his welcome with the Roger Penske team and fighting with teammate Rusty Wallace. 2 crew chiefs and several crew members walked away from the job in his final months with Evernham, a time when he was increasingly offering blame to anyone connected with his racing effort. "Most addicts experience paranoia, anxiety, mood swings and irrational fears when coming off the drug," according to marketing materials for Ocean Hills Recovery, a drug and alcohol treatment center in Dana Point, California. This is behavior any NASCAR fan can tell you Mayfield has exhibited throughout his career. Behavior which continued when he sought a court injunction lifting his suspension so he could race, as he claimed he'd missed the opportunity for a second NASCAR approved test when they'd left bad directions on his answering machine. After he had won his injunction, NASCAR was able to have it overturned by producing a recording of the conversation with Mayfield about where to go for the test, there had been no answering machine message.

At this point, Mayfield's racing career seems to be gone. His team is gone after he sold out to cover unpaid debts. And apparently the over $30 million he collected in a 16 year career with only 5 wins is gone. During the short period where the suspension was lifted, Mayfield was unable to convince any other owner to let him drive one of their cars. This had come after Mayfield's outbursts. A drug addict might seem scary in daily life, but on a racetrack he could be deadly. He clings to the irrational hope that he can again win a lawsuit and this will somehow trigger a comeback to a world where he is obviously no longer wanted. He raves of his secret new car sponsor, who would want to also sponsor races and tracks at a time when so many sponsors are leaving. This would have to be a sponsor of financial resources seemingly beyond the reasonable imagination. But Mayfield is no longer reasonable.

While NASCAR has recently made several multimillion dollar payouts to questionable lawsuits just to make the embarrassment go away, it's hard to believe they feel threatened by the Mayfield story. Any settlement might be for an amount less than the legal costs of continuing the fight, if NASCAR feels charitable. Or maybe they'll fight it to the end on principle.

And I just wonder: What might Jeremy Mayfield do on principle? Would he refuse any settlement that would include a lifetime ban from NASCAR racing, regardless of the money held out in front of him? Would he offer any amount of money he might win in court in an effort to find a regular, competitive ride in NASCAR, assuming they were forced to reinstate him? Might he even take a suggestion from a 12 step program he might enter in their expectation that he seek out those he has wronged and make amends by finding Ray Evernham and putting him back in place as a car owner? And try to recreate the two most successful years of Mayfield's career, when he was a nearly a title contender in Evernham cars?

I seriously doubt it. I can perceive the Mayfield fantasy of sailing off into the sunset with the loot, planning to settle comfortably on Gilligan's Island and write his TRUE story of taking on the villans of racing and winning, perhaps borrowing the title of the unpublished book by a disgraced baseball commissioner and calling it 'And The Horse they Rode in on.' Mayfield will make no amends, nor will he straighten his life out. He'll go right on insisting the problem isn't him. Forever seeing the persecution, continuing to claim that NASCAR spiked his urine so he'd fail tests, and continually acting out in a manner that shows the lack of focus and judgement that demonstrates what the truth of the matter is. I don't need to see the results of any drug test, I was convinced Jeremy Mayfield was a junkie long before the latest chapter of his sordid life was written.

Jeremy Mayfield is a hazard that I hope will never find his way onto a race track again. But he's been a far greater hazard off the track. I'd say the greatest harm he's done is what he's done to Ray Evernham.

You can read a surprisingly unbiased collection of articles on the Jeremy Mayfield saga at NASCAR.COM. NASCAR allows their inhouse editorial staff to question the moves of the governing body, and they've bent over backward at least trying to give Mayfield a fair shake. But making that man look good is an impossible task, no blame can be placed on NASCAR's reporters for that.