At Indy, Imitation Is The Best Form of Flattery 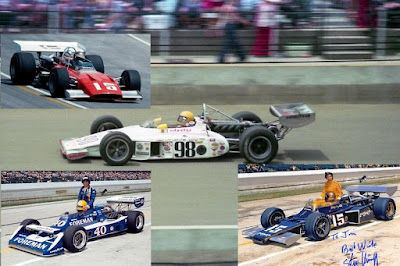 By Doug Vehle
For The Daily Bosco

If you've been wondering what Indycar racing has in common with the Chinese aviation industry, maybe you should consider stagnation. Unlike Brazil, whose thriving aviation industry is built with imported parts, China has demanded that the aerospace industry sell them technology they can take over as their own. These means the aviation leaders refuse to do business with China and building planes has been an exercise in futility. Much like trying to create excitement over Indycar racing.

I remember how excited I used to be waiting the final days before the Indy 500. I hate to say it was always about the exciting new cars, often I was more interested in the people who were struggling. J.C. Agajanian didn't want to pack it in when his onetime top team was struggling, he kept finding ways to update his out of date design and kept his team near the front. I remember the old picture of an Indycar on a consumer car trailer towed by an old station wagon. The caption said it was taken in a cheap motel parking lot in Milwaukee in 1968. From the number I figured out it was the car of Lloyd Ruby, who won both Milwaukee races that year. Such was the state of finances for the Gene White team.

So much of that excitement left when Indy became a 'Spec' series. Everyone races the same car. There was a bid put out to see who would build all the current generation Indycars, the same manufacturer already building the cars won. When the new design was ready, the old design was removed from racing. The unusual design of the Deltawing entry would turn up at Le Mans and create more interest than people have held in the Greatest Spectacle in racing for many years. Indianapolis desperately needs to see something different.

In 1963 Jimmy Clark was in the process of winning his first Grand Prix championship when he chased Parnelli Jones to the finish at the Indy 500. Noteworthy about that was that he was driving a rear engine Lotus. Two years later the order would be reversed, Clark's was the first win for a rear engine car but already the front engine had faded to only 6 of the 33 qualifiers. A.J. Foyt, the defending winner, had switched to a Lotus, though he called it a 'Coyote.' Foyt would begin to build his own rear engine cars, though at first they would be largely copies of the Lotus. Foyt won in 1967 in a Coyote quasi Lotus. Well, since all anyone in Indycar racing had known was front engine cars, you have to expect they'd be hard pressed to come up with something so good as the Lotus they feared. Everyone was looking around for something to---Imitate.

So it's no surprise that the 1961 Cooper that started the rear engine craze was copied by Vollstedt, which was then copied for the Watson. Parnelli Jones built copies of his Lola and called them Colts, Al Unser won Indy in a Colt followed by Mark Donohue in a Lola as was copied.

The most popular car to be a knockoff had to be the Brabham BT12. Extraordinary considering the lackluster career of the one example built. Jack Brabham qualified the car 25th at the Indy 500 and only lasted a few laps in 1964, then the car was sold and raced four times before it was seriously wrecked. This led to Clint Brawner collecting the wreckage in hopes of learning about rear engine cars and replicating it as the Brawner Hawk. Mario Andretti spent five years racing Hawks; in addition to 3 championships he would twice enter the last race still competing for the title but finishing second. All this was capped with an Indy 500 win.

But there's more. At the time Brawner started building Hawks for Andretti he built an extra for the owner of the destroyed Brabham with which Jim McElreath won four races and even finished 2nd to Andretti in the Championship. Buoyed by this success, Dave Laycock licensed the Brabham to built his own replicas with the name Mongoose, which won its' first race and 5 total for Lloyd Ruby. Mechanic George Morris replicated Parnelli Jones' Mongoose for him, then built more called Morris, one of which was replicated as a Cecil. Howard Gilbert built 2 Brabham based Gilberts which ran a total of 40 races and managed a win with George Follmer. James Hayhoe reproduced the BT12 from Brabham's own plans twice as Hayhoe's, which followed three lackluster seasons with a year of Billy Vukovich Jr. placing 3rd in the championship without a win.

Are you dizzy yet? Through that there were still some original designs, such as Dan Gurney's first Eagles, Yet those too were often copied, and some claimed a new name for a modified Eagle.

Then there's the Grant King cars, not so much famous as infamous. King was a builder of the Midget, Sprint and Silver crown dirt track racers so many Indycar drivers progressed through to build their careers.  Often referred to as dinosaur cars, one wasn't so different than another, all followed much the same design at the time and had for decades. A habit King brought to building Indycars.

There's an unanswered question of whether King actually licensed the BT12 design. Others bought plans from Brabham, King is considered to have imitated the Mongoose. In the 1970-71 season his two Kingfish cars were also rans in a total of 21 races. When STP lost 2 of the promising but difficult McNamara cars, the builder of which had disappeared after the mysterious death of his wife, they turned to a partnership with King to place two of their drivers for the rest of the season. This would bring Steve Krisiloff into the fold. 1971 was the year that the radical McLaren M16 sent the more well financed teams scurrying after better aerodynamics, time had run out for the BT12 knockoffs. In 1972, King had a new Kingfish which greatly resembled the McLaren, at least while in the garage. On the track the car struggled to keep pace.

King's greatest success came with the cars he began building in 1973. As popular as the Dan Gurney Eagle had become, it was easy to think King had become a customer of the All American Racers. In fact King had done it again. While last years' car hadn't lived up to the source, the new Kingfish would qualify 7th and finish 6th at Indy in the hands of Steve Krisiloff, one of his 5 top 10 finishes for the year. The Kingfish had arrived. There were suspicions of who might have allowed King access to their Eagle, which would seem to have made the difference as compared to their uncompetitive knockoff of the McLaren. The design so followed the original that the low budget teams began buying parts from King.

Which is what finally irked Dan Gurney. Bad enough someone who'd never buy a car from him steal his design, but to steal his customers too? King pleaded poverty none too convincingly, racing being expensive. Gurney retorted as not being born with a silver spoon in his mouth either.

By 1976 King's cars had run fairly well but he still hadn't become a front runner. He formed an alliance with J.C. Agajanian, owner of 500 winners with Troy Ruttman and Parnelli Jones but no longer able to repeat the success. This time King's target would be the modern Coyote's of A.J. Foyt, who would win the 500 and the Championship with that model just a year after King stole it.Steve Krisiloff was still aboard, having driven all 4 of King's cars.

So I have mixed feelings about the old days vs. the new days. When someone built a knockoff before, it wasn't really the identical car. Brawners' Hawks were considered an innovation. Donohue would comment on the superiority of the variant Colt over his OEM Lola. It used to be you could look at the cars approaching the green flag and see an ocean of variation. All those knockoffs of the Brabham BT12 looked dramatically different from one another. Longtime front engine builder Eddie Kuzma made his venture into rear engines by modifying the Lotus for customers, I've found no reference to Kuzma's own rear engine builds were based on the work of others. Today not even the paint jobs are enough to tell the cars apart.

When Indycar and Championship Racing remerged in 2008, the existing Indycar teams gave their older Dallara cars to the Champcar owners. Rather than complain that the cars were used, They brought up the sheer number of seemingly new, unused parts. It seems the OEM parts, such as front suspension wishbones, were replaced with a teams' proprietary designs for improved aerodynamics or other reasons. To give the car away, the OEM parts were reinstalled. Thus the Champcar owners felt they were given inferior cars, which were the Dallara as built. Those owners still had their 17 Panoz they had raced in the final season of Champcar. The thought of those being brought to Indy. . . .