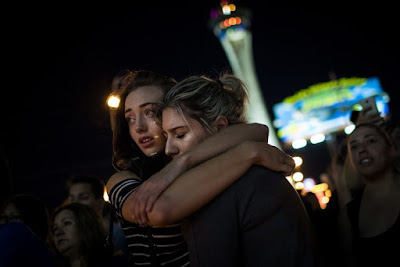 By Rick Miranda
For The Daily Bosco

I was on Facebook yesterday running across so many of the posts regarding the massacre in Las Vegas. Trying to mentally sort out news, opinions, politics and emotion into the appropriate categories and offering my two-bit responses along the way. Being mostly an observer by nature I’m fairly reticent and usually prefer to collect a substantial amount of information before letting my passion fly. But I came to a post by an individual, I guess a friend of a friend, which made me stop and take account of things in a way I hadn’t considered up to that point. He posted, “Wondering how many people are truly shocked and horrified vs how many desensitized.”

It struck me as a poignant statement. It forced me to stop and take account of my own reaction. Those first words which we almost expect to hear from every news anchor, politician and clergyman have become a knee-jerk response and are so often used these days that their meaning and sincerity have been diluted to the point of becoming vapid fillers to get your word count to an acceptable level. I had to stop and take notice at the words and their meaning – truly shocked and horrified – is that the response I had? Is that the response that anyone had? I am sure there are those who have the empathy and emotions in their reserve to garner that response. The appropriate one I should add. An act this heinous should startle us. It should prove so askew of our normal existence that no one could imagine that anyone could imagine such an act and carry it out.

This is the mayhem and violence of a bad grindhouse, Tarantino or Roger Corman film that no one would admit to watching. We should be shocked and horrified, oddly ashamed to have even witnessed such an act. Even vicariously through the news. It carries an obscenity and evil with it that isn’t even worthy of quantifying. It doesn’t tip the scales; its very weight knocks the whole damn thing off the table. There should be no reality where a man can commit so many murders with no apparent motive so effectively in such a short period of time. Its bizarre nature and the randomness of such an act should have us all pulling at our teeth in shock and horror.

And yet here we are. Or should I say here I am. I won’t speak for anyone else but I am inclined to think I’m not alone in this. I had to stop and take stock. Was I truly shocked and horrified? I must admit, to my personal shame, the answer was no. Saddened and disgusted by this terrible thing, yes. But having seen so much evil and so many horrific acts prior to this I have come to the point of not so much expecting the next awful thing to occur but seeing them as a series or progression of events. Here and throughout the world.

I will not enumerate them as they should be self-apparent. Murder, mayhem, genocide are newsworthy and have always been with us. Perhaps it’s the twenty-four hour news cycle that has made it all the more commonplace. Perhaps it’s the fact that as a result of technology we are all now amateur photographers. We (I should say I) see all the troubles in the world rather than read about them. Are they escalating? I would think yes. But I also think we desensitize at an even faster rate.

Maybe that’s not such a bad thing. Maybe it keeps us functional rather than losing the ability to cope with the violence. But I’m speaking to the danger posed with any pain killer. Too little sensitivity and I worry we won’t feel enough to heed the warnings presented to us. Sherman once said that war is cruelty and that the crueler it is the sooner it would be over. As a corollary to that I fear that the more tolerant by exposure we become to this sort of thing the more it may likely be to occur.

But I’m getting ahead of myself. Simply on a personal level I want to resist the tendency to not be shocked by this sort of thing. I don’t want to become so callous as to lose my disdain for the evil perpetrated here that it becomes another story from which I can turn the page or change the channel. I don’t know how one retains that sort of sensitivity but I will continue to strive for it. In the mean time I’ll keep gazing in the mirror and reminding myself that there’s still a world of good out there. This is not every day and it will not stand as routine. Respects to Roger Waters but in the meantime I will fight my being uncomfortably numb.