Your Next Stop: The Twilight Zone Live 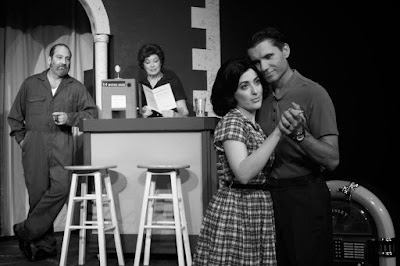 Reviewed by Richard Miranda
For The Daily Bosco

Every summer for the last few years the Stages Theater in Fullerton has adapted a selection of episodes from Rod Serling’s, “The Twilight Zone” for the live stage. Attending this annual event hasn’t been exactly what I would consider a painful process. If you like small theater, as I have found I do, and love “The Twilight Zone,” as I always have, then this is definitely worth a couple of tickets and an hour and a half out of your time. The venue is small, I count 78 seats, and the tickets are reasonable, $22 each

I did mention that I love “The Twilight Zone.” Like so many of you, I’ve seen these modern Aesop tales more times than I can count. Their dialog is familiar comfort food to my psyche and I can usually name the episode in the first ten seconds. But my passion for these tales may exceed the average viewer and normally I would recuse myself of any attempt to review such a production. My objectivity is tainted. I feel that any criticism of this briar patch of mine, in any form, is at the very least an affront to Messrs. Sterling, Matheson, Hamner, et al. They are the great writers to whom I owe so much of my sensitivities. Sculptures of my conscience that held my boyhood wonder for endless hours and still do to a great degree. So I am, at best, ill-equipped to find fault with this year’s, or any year’s for that matter, presentation. Now that being said, I will attempt to do so anyhow.

I’m not a stickler for set design and understand the minimalism necessary in this kind of theater. I’m willing to suspend disbelief to a great degree but it did seem like the main backdrop for all three vignettes was more appropriate for the theater’s concurrent production of “The Merchant of Venice.” Okay , not a big deal.

The first story was “The Old Man in the Cave,” a small post-apocalyptic community struggles to survive a decade after a nuclear holocaust. Their leader, a Mr. Goldsmith, played by Glenn Freeze, receives information and instructions regarding everything from the weather to foodstuffs from a reclusive sage supposedly living in a cave. A band of military types come to town and challenge the authority of Mr. Goldsmith and the old man.

Some have criticized the episode for a number of reasons. Believability, predictability, etcetera. I won’t belabor the issue and will leave that the to “Zone” fans. As a lead in for this year’s trilogy of stories it was a modest and pleasant presentation. I enjoyed Michael J. Keeney as the leader of the soldiers, Major French. He was a bit more believable than some of his fellow soldiers whose portrayals of raiding banditos seemed a tad mechanical.

Next up, “Nick of Time” should be a memorable favorite as it’s one of two episodes that originally starred William Shatner. No it’s not that one. This lesser of his two credits is the story of a young newlywed couple temporarily stranded in a small town waiting for their car to be repaired. Taking refuge in a local diner an overly superstitious Don Carter (Steven Jones) and his wife Pat (Carolyn Feres) begin to feed pennies into a fortune telling machine that nearly ensnares Don into subservience.

Jones and Feres both give capable performances as do the rest of the cast. Measuring this against a Shatner performance isn’t exactly fair. It’s like those singing shows where the contestant tries to sing Whitney Houston or Celine Dion. We’re talking William Shatner - put the guy in a room and tell him he’s a superstitious young newlywed and he’ll singe the wallpaper. Unfortunately Jones’ take on the character lacks something that conveys the preoccupation and neurosis of Shatner’s original TV performance. He just seems like a normal guy. Upon leaving the diner he picks up his lucky rabbit’s foot and kisses it before putting in his pocket. Maybe if he’d done that when he’d taken it out. More clues to his character, or anxiety should have been there. Still, he gets points for degree of difficulty.

Last up is “Dust,” a story of a dry and weary little village in the old west on the day of an impending hanging. Luis Gallegos, portrayed by Mario Martinez, is a man who on a drunken rampage hit and killed a little girl with his wagon. He has been convicted and is sentenced to hang for his crime. The opportunistic peddler, a man named Sykes (Paul Burt) who has sold the town the rope with which to hang Gallegos is the chief antagonist and taunts him and attempts to fuel the town’s disdain. Gallegos’ father (director David Campos) seeks mercy for his son and Sykes takes advantage of the situation by selling him some “magic dust” that will assuage the townsfolk of their hatred and desire for revenge.

This is not one of my most favorite stories but I have to say it is the best executed out of the three. Burt’s performance as the bloated and overbearing Sykes is spot on. Martinez is convincing as the condemned man but Campos as his father offers a tremendous portrayal of a desperate man pleading for his son.

All things considered, I was not disappointed. I guess it comes down to whether or not you loved the television series and the stories. Some are better than others and each of us has our favorites. I certainly look forward to next year’s selection. As always, the staff is welcoming and the cast is up to the task. For a modest fee you are invited into that middle ground between light and shadow, between science and superstition, that lies between the pit of man’s fears and the summit of his knowledge. I will be there again, next year and likely as long as they continue their journey into “The Twilight Zone.”