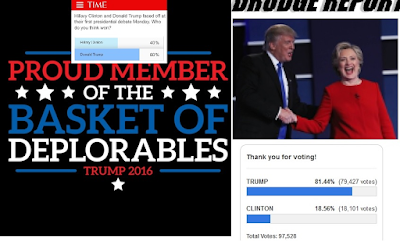 Presidential Debate Analysis
By Doug Vehle
For the Daily Bosco

So it's been one of my big gags for the election saying that after all she has done, some people are still ready to look the other way and vote for Hillary Clinton. But bring up Donald Trump who basically has no skeletons in the closet that compare to those of his rival, then listen to the horror of Hillary supporters as they gasp: 'Trump! He has a. . . a BIG MOUTH!' Yeah, I could see where a big mouth would outweigh scoffing at national security and then madly destroying the evidence AFTER she's been caught. (This is where I'd put the eye roll emotioncon if I was into those.) But now Hillary supporters, you have reason to express even greater shock at your candidate than at The Donald: Hillary has unleashed the biggest loudmouth moment of the election inspiring jokes, tshirts, maybe even lost the first debate before it started.

You see it all through the debate, though less and less as the horror of losing began to show in her face. But that smug, elitist smile, backed up by contemptuous comments, even her supporters are admitting they're having a little trouble with it. Harder still to realize it's a further confirmation that Hillary, not The Donald, has had the biggest single foot in mouth moment in the campaign.In her great desire to point the finger, it was Hillary who roved most deplorable.

If you didn't see it a few weeks ago, just picture that smug, 'I'm better than you all' smirk that came out so often in the earlier part of the debate, when she could still believe she was doing well enough. She was already leaving the stage after that speech a few weeks ago when she apparently was overwhelmed by the ease of preaching to the choir. Then she came back.

I've always said that some of the most important things a person ever says are suddenly blurted out in an unthinking moment. Years of guarded performances don't outweigh that moment when Toto pulls away the curtain hiding the Wizard of Oz. Don't waste your time saying pay no attention, I'm gonna go see what the dog saw.

In one of the smuggest moments Hillary Clinton has ever allowed herself to reveal, she reveled in the power of leading the self absorbed. 'WE can do no wrong. WE are better than anyone who is not us. WE don't have to care about anyone but ourselves.' This was her message when she called Trump supporters ". . . .A basket of DEPLORABLES."

She has since wavered, acknowledging she shouldn't have said it one moment but trying to 'Gracefully' contend she's right in most others. The candidate some call the most out of touch in history doesn't bother to notice the polls that can top 80% saying the government isn't interested in representing us and never stops to think about that. Instead she clings to the opinion of that truly deplorable article in 'The National Review,' with the thesis 'Pay no attention to Mike in Garbutt, New York.' An article that says anyone who thinks the country is going to hell in a handbasket deserves to go there. Hillary Clinton wants to dismiss them as a handbasket of deplorables. And she does.

Which continued to show in her face in the debate, as she wore the same expression with which she revealed her inner feelings. Until she started realizing she was losing. Can't say I thought showing panic in her face during a debate was particularly presidential. I'd say she had a Nixon type outing in this debate, her supporters were probably much more comfortable listening to her on the radio than watching the reveals in her face on television.

So could there be anyone more strident than a convert? Such as a onetime Hillary supporter who now sees through her? Right about now I'm not ready to see any good in her, there's so much bad showing through that's new to me. You're going to need a bigger basket, Hillary, those you deplore greatly outnumber those you don't. I wonder just how many of your supporters don't realize how much you deplore THEM.

At some point, all those Democratic spindoctors are going to have to admit they've already dislocated all their shoulders madly patting themselves on the back trying to pretend they're not out of touch. They'll have to realize that everyone is laughing at them as they spend the day trying to pretend they won. Aren't they? I don't think I've ever seen such a moment of people considering themselves the intellectual superior openly telling people they have to be the unthinking sheep and follow, with so many accepting that. Such as polls where more than half of registered Democrats support repealing First Amendment and banning free speech.

Maybe they'll at least catch on that this whole 'Must play the ultimate politician' game of theirs is not some rule they get to force on others. No, you don't get to demand others enforce YOUR PERSONAL RULES. No, nobody has to think you wrote the rulebook and let your candidate win because that's how YOU want it. It seems so trademark that the party I've been a member of my entire adult is no longer the party I joined but a party of whiners and pouters putting on a delusional campaign, hoping there'll be enough similarly delusional voters to follow them. Listening to the callers offering backhanded support to Hillary Clinton on the radio today is just as revealing for the struggle as was Hillary's struggle.