On the Look Out For Psycho Cindy 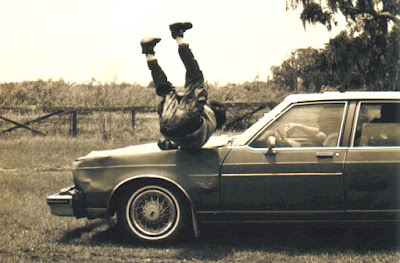 As tales of facing death go, this might not seem the most exciting you've ever heard. But it was happening much the same as the previous attempts on my life, so I was in a familiar spot. Much as I'd mused to a relative recently, as I was thinking that my current condition was gong to leave me unable to escape this time. Now I was staring down the headlights as she bore down on me.

Has it really been almost two months I've been struggling with this? It didn't seem it should be a big deal. Something wrapped around my right ankle, perhaps a cat that slipped up in the darkness as I ran at night in the hot weather. A few hops on the left foot trying unsuccessfully to balance myself, then a landing that left me with both elbows and my left wrist dislocated. The left hip didn't seem to be a big deal at the time, but it got worse with the unstable walk without my arms swinging and no help standing up all taking their toll. When a sudden SNAP left me unable to walk and writhing in pain, a security guard told me "If you pass out, you'll wake up in the hospital." I could see where some ordinary person might lose consciousness with this but you're dealing with Doug here. When the paramedics arrived they went to work expecting me to have a stroke, a heart attack, some bad reaction to this. Nah, before long I got up and walked to my car, no ambulance, no painkillers, nothing. But I was literally unable to lay down for the next few nights and had to sleep in my car.

This is where you dream of something being a little out of place and all your problems being solved by just getting it pushed back. I recall at the age of maybe 11 being called on to help my adult sister who'd recently fallen down some stairs and dislocated her shoulder. She was having a terrible time with it catching suddenly and she'd beg someone, anyone to give it the twist it needed, The only one older than me present at that moment was a sister who's rather useless, so I had to be the one to do it. But like any 11 year old, I was rather reluctant to deal with it. She didn't so much encourage me as simply scream "If you DON'T do it I'll PASS OUT FROM THE PAIN!" I heard and felt the snap. HORRORS! I'd ruined everything just as I'd feared. The amazing thing is after the initial cry she was then obviously relieved. Such was my introduction to a few torturous seconds bringing the blessed relief.

But there was only so much the rolfer could do, he even suggested what I really needed right that moment was a chiropractor. And it takes a very special chiropractor to deal with me. There was one that was perfect. A former football player and wrestler, he was accustomed to making people go "Oww!" Important with me that you be ready to really pound, as I'm quite solid. He remarked I was probably the only patient he ever had that could take more than he dished out. No matter how bad it got, I said "Keep going," and he did. Until he moved out of state.

The current is a former basketball player. Strong with long arms for leverage, there's still the problem of him being a big too kind hearted bear down as I was at that moment. The leg that wouldn't bend into the position he needed, the back that would twitch too much, the adjustment wasn't working, so he was stumped. I was going to have to wait for some of the swelling to go down. In the meantime, if I had to park a mile away, it was taking 45 miles to walk up. And man, did it hurt.

And I casually asked, in a text to a relative who had known her while living with me, what if my stalker returned? My understanding is that she's an odd twist as stalkers go. Rather than a woman scorned, this one had scorned me back in college. Going so far as to have me wait for her somewhere and having a good laugh the following week at school after she hadn't shown up, though she'd gone down to check that I was still waiting. So years later began the repeated call and hangups, the calling and questioning relatives that lived with me, the vandalism of my house. . .

. . . .And the occasional attempt to run me over if she caught me on foot. So far, I've done a good job of scrambling out of the way when she suddenly runs a red light she'd stopped at until I entered the crosswalk, the high speed left turns from the right hand lanes, the driving up the sidewalk or chasing me through parking lots. I've reached the point I forget to look at the cars as I dodge them --- What difference does it make if it's her? As long as she misses me.

But here I wasn't moving quickly. Was there any hope of evading psycho Cindy?

So people think of chiropractors as one size fits all, each doing the same things as the other. While my regular was able to deal straight on with my lack of pliability, he was lost in this situation that called for a bit more finesse. I found someone local who wasn't going to be able to act in a straight on manner either, but she had a roundabout approach that was working slowly. My walking pace was improving, I wasn't requiring as many reststops.

But still I wasn't going to be able to get out of the street before this car reached me. I was crossing Santa Fe, just south of Commonwealth, right in front of Heroes. I was moving slowly, but plenty of time to get across before the headlights I could see at the stopsign some 400 feet away at Malden could reach me. At least, in the hands of a sane driver, it would take more than 10 seconds.

The fact being that, at a speed of 25 miles per hour, a car moves less than 40 feet per second. Compared to 60mph which covers 88 feet in a second. If I knew the 0-60 acceleration time for the particular make of car, I could estimate how quickly the driver could come down and kill me with the engine roaring as it was. I had just passed halfway across as I heard the sound. I was guessing I had less than 5 seconds, no way I could make it the rest of the way in that time and I was on the side of the street the car was driving on. For all the jokes you hear of the person who realizes in an emergency that they really can get up out of that wheel chair, any hopes I'd realize I could move better if I had to were quickly dashed.

Ah, to think people used to joke that they'd expect me to do a flip over such a car, putting my hand on the roof as it drove under me. Here it was all I could do to turn around and stagger a step or two to get out of the lane before I was hit --- Assuming it was not Psycho Cindy and there was no swerve to follow me. Just some reckless driver I might be able to survive.

I've never spoken to this stalker since her behavior turned so extreme. She'd made several attempts to draw my attention to go speak to her, but it's my understanding it's best not to engage the stalker. It's been suggested by people who used to know her that she'd made a mess of her life, (Can't imagine how, right?) and somehow she must be trying to take it out on me, seeing as how she'd already fixed me in her mind as her victim. And I do assume that, had it been her coming at me, she'd have finally had me. I wonder how she'd be explaining herself afterward, assuming she was caught.

Somehow I even kept from falling as I pulled myself out of the path of this car. The driver stopped, having already passed me, and, rather petulantly, said "Sorry bud, can't see on this road." If you've driven that stretch of Santa Fe at night you know it's very easy to see, one of the best lit stretches you'll find in a city thanks to the need to illuminate the pedestrians to and from the parking garage on one side of the street. All you have to do is bother to LOOK at you'll see just fine. Instead I addressed the bigger problem: "You've got no business going that fast on this street." And of course he tried to deny he was going fast, foolish enough to ignore me saying "You were going WAY TOO FAST. . . ." as he just punched it again and took off. Quite fast. (Maniac, as George Carlin said.) Has it ever occurred to Fullerton PD they should radar that road at night from time to time? Nothing unusual about drag race driving down there. The drivers even get angry at pedestrians for interrupting their little miniIndy.

So I wasn't injured, but he didn't have to hit me to hurt me. It was a cool evening, here I was sweating from what the effort was still putting me through. I could see how people could become suicidal from this. It just flairs up hurting and it won't stop. You think this is where a spouse is supposed to help you, but I could see where I could have wound up married to that crazy woman who tries to kill me. Dang, imagine what might have happened.

14 hours later I was on the bench with Dr. Rippy, less than a quarter mile from the spot I'd almost been mowed down. The big moment came, at last I felt the telltale crack of that stubborn sacroilia c. Not the instant cure I might have hoped for, but definitely a tipping point. An hour later I was showing someone who'd been witnessing the battle that I was standing up straight. Already I'm walking close to normal.

And about 24 hours later I was on Santa Fe, trying to cross in the dark. No sign of either Psycho Cindy or that other psycho driver. Ah, let them show up. At last I'm ready for them once again.