2015 Ends Well After All For Kyle Busch 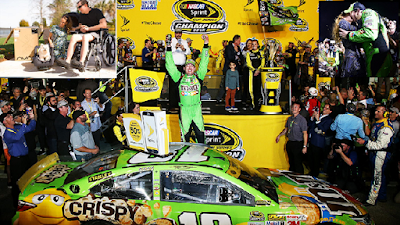 One of the shocking moments of modern society is to be fearing for the life of a perfect stranger who you feel you know well. 3,000 miles away, he's struggling to his feet, the horror in his face shows things are not alright, suddenly he's falling, his face almost blank. Moments earlier his car had been heading straight at a barrier around 100mph. In the grass there'd be no turning, no braking. Even the haters of NASCAR who mindless boo his misfortunes fell silent. Now the emergency crew can only wait for the ambulance, as we in the audience think "My God, we're watching him die on TV."

Thus begins one of those great inspirational tales that Hollywood makes seem so phony and unlikely, as Kyle Busch made his way from the hospital bed to a wheel chair. His coming back this year was widely dismissed, coming back at all was called into question. Yeah, we know Hollywood, they expect us to believe the triumphant return was inevitable. But he still had to hope he would walk.

In recent years there seemed only one appropriate comparison for Busch, that of the King himself, Richard Petty. (Number 43 in the movie 'Cars.') 200 wins in 1184 starts over 23 years beginning in an era that Petty himself calls largely "Amateur hour." Stock car racing started out as something to do with an old Model T, once it was no longer a suitable transportation car on paved highways. Perhaps three decades after the first stock car race, (Who could say for sure?) Petty himself would often haul his car to a midweek county fair race where he'd be the only mainstream 'Grand National' driver on hand, then running off from the maybe 16 locals who were happy to follow a 'Real' racer. There were at least some big money races that attracted all the top drivers, where Petty showed he could beat the real thing, too. By the time the seven time champion retired in 1992, all races Petty ran were major events, while the "Stock car" was transitioning into a purpose built racing frame with a streetcar replica body, but there were still production car parts in the car of Petty's last start.

It was more than a decade later when Kyle Busch made his first start in a 'Cup' race, as the onetime Grand National is now called. Even the mini 'Legends' cars which Kyle had won championships as a teenager might have seemed exotic to a young Petty. At their peak NASCAR offered as many as 96 events annually in three national series, and Kyle was running in most of them.  29 years old at the moment his car struck the wall of the Daytona infield, only Petty and Jeff Gordon had won more cup races at his age, while his 141 wins across the 3 series was more than all but Petty, while his winning percentage put him on a pace to exceed 200 by the time he matched Petty's 1184 starts. Petty himself calls any comparison "Apples and oranges, too hard to say which is better." Busch seemed to be on his way to becoming the other bookend to Richard Petty, the two greatest of the starkly different eras.

Or was it all over? There's many stories of the once great who recover physically from a bad wreck but never reach the same heights again. Sterling Moss, Troy Ruttman, many hall of fame names. A.J. Foyt took years to fully regain his form after flipping his car. Those whom we could recognize as at least knowing what they're talking about were suggesting there was no point in Busch even getting into a car again this year. If ever.

It would be 12 weeks, just 84 days later, Busch was behind the wheel in the NASCAR All Star race. It would take another four weeks to get his first win of the year. The driver who five times won 20 or more races for the year would run less that 2/3rds of his normal schedule but continue to win about one out of four, a pace that surpasses even David Pearson's career one in 4.5. Far and away the alltime leader in wins in the Second tier Xfinity Series, (Known as the Busch Series at the time he won the title in 2009) he inched just 7 short of a new record for the Third tier Camping World Series. But obviously a first Cup title would continue to elude him after he missed more than 40% of the part of the season where the drivers qualify for the "Chase," a playoff of sorts where only ten races count toward the championship. As the announcers cited the improbable sequence of events Busch would have to accomplish just to qualify for the Chase, driver turned commentator Michael Waltrip laughed and finally said "This is Kyle Busch you're saying has to do this. . . ." Staged that way or not, the argument ended on that note.

The oddity of the Chase format holds that, while winning four of his 15 starts couldn't pull him even on points with others who had run all 26 races, on wins alone he was seeded in a tie for first with the only other four race winner. Joey Logano proved the winningest driver during the Chase, but once he was deliberately knocked out of a race by Matt Kenseth he was unable to advance to the final round, leaving Busch to compete with such other dramatic stories as the rise of the usually hard luck Martin Truex Jr. and his also ran team, the final year of Jeff Gordon, as well as defending champion Kevin Harvick as the only drivers still eligible for the title. For all the dramatics of his year, he was finding it hard to compete for the role of sentimental favorite. If Hollywood tried to sell us on this story, noone would have bought it.

Indeed, the sentiment of the crowd has been hard to come by for Kyle Busch, dating back to his days racing those Legends cars in Las Vegas and having the animosity that his bad boy older brother Kurt would earn turned on himself. Indeed, when Kyle arrived in NASCAR Kurt was already triggering automatic boos for anyone named Busch, even while winning the championship in 2004. "Sure, you can boo me. . . ." was a typical cheerful Kyle Busch response. He would even bow as they did. 141 times prior to the accident, as the always loud "Junior Nation," voting for more than a decade to make Dale Earnhardt Jr. the most popular driver for reasons not even they understand, would cheer engine trouble, getting collected in someone else's accident, any setback that would cost Kyle Busch. The boos faded during his successful comeback, but didn't go completely silent. What would be the reaction if he won the championship that Junior never had?

So what would you do if the entire 36 race season turned out to ride completely on the last race? Would you 'Stroke' it? Run like a points racer, just trying to stay out of trouble and hope you have less trouble than your three competitors? Busch, in his normal style, made an early dash out front. If NASCAR released a statistic for who had led the most laps for the sum period of Kyle's career, he's bound to be the one who did it. But there's always some 3-4 hours of racing in NASCAR, a lot would change before the race was over. Literally, whomever finishes in front of the other three finalists in that last race wins the Cup Championship for the year.

Martin Truex Jr. and his underfunded little car that could again managed to push its' way into the lead, but a pit fire set him off the pace. Jeff Gordon also briefly led, but it was one of those days where just a little something was missing. While Busch was usually the highest placed of the finalists, Kevin Harvick was usually close by, in fact managing to lead almost 1/6th of the race. As the race wound down and Busch was alone near the front of the pack, Harvick began to work his way through the field until at last he was the next car behind Busch. Nicknamed 'The Closer,' Harvick is known for finding his way into second late in the race then slipping past the leader just before the checkered flag. Even if they were racing for third, such a pass would steal the biggest prize.

So a yellow flag lined up Busch and Harvick behind the first and second place cars. Getting the drop here could potentially seal the final result. Busch, in fact, is known as the 'King of the Restart.' Indeed, he flew past the front row cars, with Harvick right behind. Indeed, if this was Hollywood film it would be Harvick leading the way while Busch looked desperately for a way around.

But Hollywood doesn't get it.  Racing fans don't need some last second, nose inches out front photo finish. Sometimes you just want to see the champion look like a champion. And on that last restart, nobody could run with Busch. The announcer would say ". . . His closest competitor---A dot in the rear view mirror. . . ." The crowd had no trouble cheering as the gap widened and Busch came home first for the race and first for the rear.

So how was your year? Mine wasn't so good, even before the big fall I'd been hurt. Not as bad as Busch. Bust somehow, just knowing how it was killing those boo birds to see Kyle Busch come back, win races, make the Chase, even take NASCAR's top honors, makes 2015 seem worthwhile. You know it's just killing them. Now the one great hurdle left to be cleared is to be watching all the haters cry when Danica Patrick wins a race. . . .