On 50 Shades, Indy Jones and Unspeakability 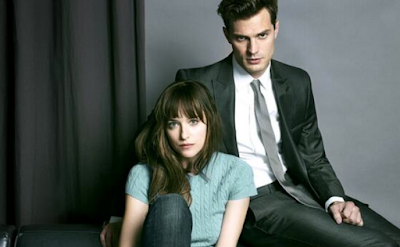 So I wind up walking in with my phone playing 'For the Longest Time.' But isn't that just the model of the storytelling adage, 'Start too late.' But it's always too late when I tell a story about dating. Or not dating, in this case.

It starts with, of all things, the movie '50 Shades of Grey.' I'm eating a sandwich at a counter with a woman I knew from before her divorce working there now. She wasn't talking to me, but to the woman next to me, a similarly divorced woman. Now, I have my own trepidation about that movie, after hearing that the novel is about---umm, getting up into the area of unspeakable things, as far as I'm concerned. And I'm seeing this nice girl, Dakota Johnson, on the cover of magazines to promote herself as the one the unspeakable things are being done to. When I say 'Nice girl,' it has particular meaning coming from me.

So they're really concerned that the movie will let them down. I was anxious to ask what might disappoint them, but I was assuming that they were worrying at the possibility that the unspeakability of the novel might become easier to say in the movie. Certainly there would prove to be some issue; at a press screening a woman, I assume a reporter, called out at the end "Can I get my money back?" This at a screening she didn't have to pay to get into. So she didn't seem to get into it. I did get a chance to make the joke to these women that, with a title like '50 Shades of Grey' they should at least be relieved they didn't decide to match 'The Bridges of Madison County' and get Clint Eastwood. They only seemed to take that as further discouragement.

So I guess for them it's like me with 'Raiders of the Lost Ark' or 'Lost Horizon.' I guess we all know what adventure were never going to have. Though you wonder if they really regret that, if they might actually be thinking there's nothing ventured, nothing gained if they turn down the opportunity to experience. . .UNSPEAKABILITY. Well, I suppose I don't really want to take the beating that Indy takes, though the thought of being kidnapped and taken to a place of indolent education and culture to live out my days makes me think ole' George had it pretty good. But he ran away. In the novel AND in the book.

Ah well. Just as the joke is supposed to be that you hear women talking this way and you're supposed to hit on them. That may even have been what they wanted. But I figured I'd just slip away. I mean, how does one speak of their stand on unspeakability, right? Afterall, I was always the boy that the girl's mother LIKED, I was assuming because she could tell I wasn't going to be tying up her daughter. Which helps the daughter to figure out just how boring this is going to be. There always seems to be this huge difference between the direction I'm trying to go and the direction of the women I know.

And it must be boring that it doesn't take much to get me excited. Another night after hearing them speak of the unspeakable, I found myself walking downtown right past a place with two women and two men at a table with 5 chairs right by the window. The two men were sitting next to one another, as were the women. But there was an empty chair between one of the women and one of the men, a chair that was quickly filled by another woman returning to the table. And with that I was realizing that the one that had caught my eye was the one that didn't have a date. She was the one talking, laughing, lively. Seemed like a nice girl. (Oops, there's that again.) I haven't been bothering to think that way lately. Remember how you used to think you were going to be able to see the girl, walk right up to her. . . ? Admit it, you used to think that. Before you knew better.

So I kept going, getting out my phone and making it play Billy Joel's 'For the Longest Time.' It was still going as I walked into this particular restaurant I'd been heading to. It was rather busy in there, a certain waitress was busy but she was watching me. I met her several years back through a couple that isn't around anymore. Her longtime boyfriend isn't around anymore either, apparently didn't agree that after all that time they should be getting married. Which makes her recent change of attitude toward me interesting in more ways that one. She reminds me of the girl from school that flatly rejected me then went on to five marriages, that I know of.  Who knows what she's been up to since I last talked to her. I think she was three into it when she let me know who she had in mind for number four. Oh the scene she made as she realized that being thought of as just another guy that would recklessly marry her was high on my unspeakable list.

Maybe I shouldn't be comparing this waitress to her. The waitress seems like a nice girl. Oh wait, I'd have said that about this other back in school. Funny, sometimes it seems that my use of 'Nice' is interchangeable with others use of 'Dreary.' Dang, does the stranger across the room seem like a safer bet BECAUSE you know there's no point in trying to talk to her?

Maybe I should just turn up the music. Oops, it has that word in it: