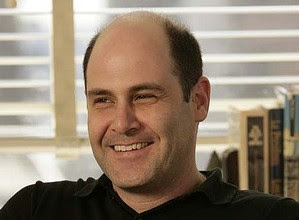 Just when Mad Men finished the best and most interesting season in it's seven year run showing the happenings of 1968, news comes that show creator Matthew Weiner thinks it's time to wrap the show up.

At least, can the show make it to 1969 so we can see the New York Mets win the World Series again?

On Monday (June 24) edition of  The Business Radio Program with Kim Masters, Weiner, creator and show-runner of Mad Men, opens up about his conflicts with the show's network, AMC.

He insists he doesn't read online chatter about the show -- for his mental well-being -- and doesn't have a Twitter account.

After four years of winning the Emmy for Outstanding Drama, the series lost out to Homeland last year, but he hopes to reclaim that spot. And he says it's time to end Mad Men.

In the Hollywood News Banter segment of the show, Masters and John Horn, film writer for the Los Angeles Times, banter about this week’s top entertainment news stories which includes Big shake-ups at Warner Bros, Hollywood’s most successful studio. Bruce Rosenblum, former head of the TV division goes to Legendary, the studio known for big movies and Jeff Robinov, head of Warners' film division is looking to negotiate his exit.

Also, Netflix strikes a huge deal with Dreamworks Animation to provide 300 hours worth of original programming.

The Business is the show about the business of show business.

It goes beyond the glitz and glamour to the who, what, why and how of making movies and TV.

The Business is hosted by respected entertainment industry journalist Kim Masters of the Hollywood Reporter and produced by KCRW radio in Santa Monica.

Each week The Business features an analysis of top Hollywood news with John Horn of the Los Angeles Times, in-depth interviews and the occasional feature story.

Listen to The Business in the Greater Los Angeles area on KCRW 89.9 FM radio or through KCRW.com at 2:30 PM PT .  We have also provided a link to the show in our Bosco News and Information Radio section in the Sidebar.