How To Help the Oklahoma Tornado Victims 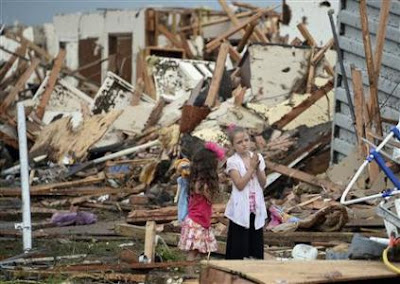 A massive tornado touched down Monday in Moore, OK., near Oklahoma City, leveling the area to little more than debris.

According to the Associated Press, dozens of deaths were reported by the state medical examiner's office.

"Hearts are broken" for parents looking for their children, Gov. Mary Fallin told a news conference, the AP reported.

Aerial views show rampant fires, crushed cars and buildings in ruins. 29 are reported to have perished in the Tornado with nine being young children.

Two elementary schools were heavily damaged, according to KFOR. NBC reported that 200 people with minor injuries were being treated at a triage center. "Some are more grotesque," Oklahoma Highway Patrol spokeswoman Betsy Randolph said of the injuries.

The devastating twister comes in the wake of tornadoes and powerful storms throughout the Midwest Sunday and Monday. The storm is in the near vicinity of where a previous twister hit May 3, 1999, which carried record-setting winds, the Associated Press reported.

Let others know you're okay! Very critical in search and rescue efforts.

Red Cross The Oklahoma City Red Cross will open shelters as first responders assess damage. The organization says in the immediate aftermath, the best way to help is to donate at RedCross.org or text REDCROSS to 90999.

Salvation Army The Salvation Army has mobilized a number of emergency relief services in Oklahoma, including Moore, to dispense food, hydration and emotional support to first responders and survivors. Donate online or text STORM to 80888 to contribute $10 to the Salvation Army’s relief efforts or make a donation via phone at 1-800-SAL-ARMY.

Samaritan’s Purse, a nonprofit that fights poverty, has sent a disaster relief unit and staff to help people affected by the tornadoes in Oklahoma City.

Operation USA  will work with Oklahoma's impacted community clinics and hospitals to help replace lost equipment and supplies as well as make grants to the extent of available funds from the public to help replace health resources lost.

The University of Oklahoma is opening up spaces in Housing for the displaced families! Call 405-325-2511 — OU Sooners (@UofOklahoma)

Feeding America will deliver truckloads of food, water and supplies to impacted areas through its network of more than 200 food banks and 61,000 agencies. The organization's food banks will also set up additional dropoff sites.

Team Rubicon, a nonprofit that deploys military veterans to respond to disasters, is sending teams to help with assessment and home repair.

Link and listen to the up to the minute news from Moore, OK throughout the day via the links in our sidebar under Bosco Radio News and Information Channel