Barnstorming With The Babe and Lou 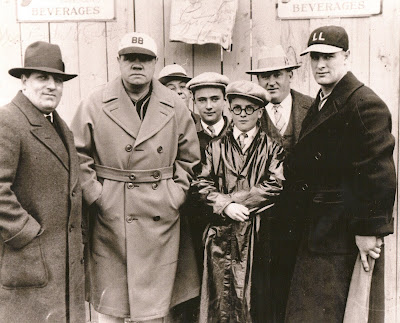 By Richard Miranda, The Daily Bosco

My wife is an elementary school teacher and apparently a pretty good one.  I could brag about her various accomplishments and awards but that’s not what this is about.  One of the indications that you’re getting through to your students is their willingness to share aspects of their personal life with you; things that they think you will appreciate and acknowledge.

Considering that her class room is adorned with all kinds of Angels memorabilia it certainly wouldn’t be difficult for a fourth grader to draw the conclusion that Ann is a baseball fan.   This isn’t just a poster or two; we’re talking some serious tchotchke.  Hat’s, those little bats, some rally monkeys and, her personal passion, bobble heads.

One day one of her students, Vianna, comes in with this picture.  The original had hung in her great grandfather’s office for most of his life.  Babe Ruth and Lou Gehrig are posing along with their managers and two boys in between them.  The two boys are Vianna’s great grandfather and his brother, Jerome Doherty (with the glasses) and his brother Francis, ages 12 and 13.

Now there are few photos of Ruth and Gehrig around as it is but the most intriguing detail in this picture is the caps they are wearing.  Neither possessed the familiar Yankees logo.  In doing some research I discovered that after the world series of 1927, Christie Walsh, Ruth’s financial manager (and the first agent in baseball) organized a 21-game exhibition or barnstorming tour as they were known.  It ran across the country from Providence, Rhode Island to San Diego, California.

The Bambino got $2500 per game playing for the Bustin’ Babes while Gehrig made a flat fee of $10,000 with the Larupin Lous which was $3000 more than his annual salary at the time.  Ruth and Gehrig would lead off the innings to please the crowds.  When Ruth hit a home run it was a common sight to see hundreds of young boys jump onto the field and mob him as he ran the bases.

To keep costs down,  the rest of the rosters were filled with out with local talent and players and from the Negro league team, the Brooklyn Royal Giants.   So successful was the tour that it was repeated the following year.  Included in the schedule was Borchert Field in Milwaukee, the site where this photo was likely taken.

Based on the provenance of this photograph, the Doherty brothers went to the game in Milwaukee.  While they were getting some hot dogs a photographer from the Milwaukee Journal invited them to have their picture taken with Babe Ruth and Lou Gehrig.  The actual quote included the statement, “Someday these guys might be famous.” Considering the year this can be attributed to sarcasm.  Both players were quite well known and their celebrity was, in fact, the point of the whole tour to begin with.  Not to mention the Yankees had just won the World Series, both in 1927 and 1928.

Both of the boys jumped at the chance to be in a snapshot with these two Olympians and received a copy of the photo from the photographer.  At some later date, Babe Ruth’s wife signed the front of the picture which is barely visible on the left side.

It may just be an interesting footnote in baseball history but thanks to this photo I’ve learned a little more about the history of our national pastime, about Babe Ruth, Lou Gehrig and even Christie Walsh.

I’m not sure where the original picture is now or who has possession of it but thanks to my wife’s young student and fellow baseball aficionado we now have a copy suitable for framing that will hold a place of esteem in our own home office.