Ghosts of Valentines Days Past Or The Saint Valentine's Day Massacres 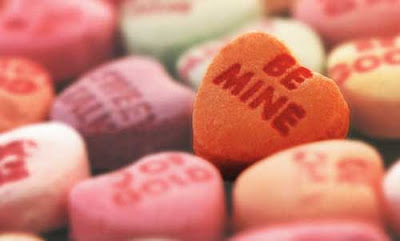 With Valentines Day today, it reminded me of my not so successful attempts at romance and love during my life. Romance and love are like golf in some ways.

You think you have it down and everything is going good and the next thing you know you are putting out of the rough or chipping out of the sand trap.

I remember my very first Valentine's Day. I was seven years old and in the second grade at Richman Elementary School. I received 14 Valentines from 14 different girls!

Being unclear on the concept, I thought I was receiving 14 proposals to be these girls true love or husband. All I had to do was pick the right one or as one card, which was my favorite, because it had a train on it said, "...choo choo choose" one. Well, I chose this girl, a curly brunette named Theresa based on the fact that she gave me the Train card with a box of those Candy hearts...with each heart having a saying...an expression of her love. Plus that chalky candy that later I found out tasted much like an antacid were really good.

When I tried to return my affection to Theresa after school on the playground she promptly used the occasion to kick me in the groin, which when I think about it is a really good metaphor for what happens when you get rejected by the object of your desire.

Fast forward to High School where I had a huge crush on Darcy. Well actually it started back in Junior High when Darcy and her identical twin sister Donna would say hi to me when I was walking home. To a pimply faced, uncoordinated, greasy hair kid with very low self esteem this was the highlight of my day.

With Darcy and Donna being identical twins, and both of them being the cutest girls in school, this made me aware that what I really liked was not so much the looks, as it was the personality. Donna was a very nice girl, but Darcy just seemed to be more warm and friendly and somebody I could trust. If it was just the looks, I would have liked them equally because I couldn't tell the difference between the two sisters physically...they were both very attractive.

This was also the time where I was introduced to that feeling around your heart, kind of a pain in the middle of your chest when the person you like or love isn't there. Sometimes Darcy would take another way home from school or would be absent. That's when I felt that pain.

This obsession from afar went on into my Freshman year of High School.

At High School in my Freshman year they had a flower sale for Valentines Day. They sold those fragrant carnations....Red and white ones.. and they would send them during the day to the person that you wanted. I thought this would be an excellent time to really show Darcy how much I loved her. I used all of my money from lunch and I bought her one red carnation and one white carnation.

I waited with much anticipation for over 24 hours to see what kind of a reception I would get from Darcy. As the lunch hour approached... when I would see her eating with her friends, my heart started beating really hard...the proverbial "almost coming out of my chest" hard.

Something funny happened on the way to that lunch meeting however. In third period, totally out of the blue, the people handing out the carnations came into the room. All the usual suspects got flowers for sure...Hobie, Patsy, Kim, Laurie...but the next name took me by surprise. They called MY name. First of all I thought it was some type of mistake. Then I realized I wasn't the punchline of a joke. I took my flower, a single red carnation, went back to my seat and opened the attached note with much anticipation. The note was...blank.

Whoever sent me the flowers did not send me a note. My mind was racing... who would have sent me the sweet smelling carnation? I came to the conclusion that there could only be one...the gorgeous young lady who had said hi to me almost everyday for the last two years...Darcy.

The lunch meeting with Darcy was one of those surreal moments when things kind of slow down to half speed. The weather was perfect and sunny. And beautiful Darcy was standing outside the school library with the two carnations I had sent her in her hand. She was by herself as if she was waiting for me although there was no prearranged meeting. I nervously approached her and managed the words, "You got my flowers?" "Yes,", she said, "You are so sweet, thank you so much" as she flashed that wonderful smile and batted those big beautiful eyes.

The next words out of her mouth, however, were not in the script, not mine anyway...

"Who sent you your flowers?", she asked innocently. I stammered as if the words would not come out. "You mean you didn't send these?" "No silly...why would I do that?", was her reply. Suddenly everything changed. Motion went back to full speed, the February air felt a little more chillier and...HE walked up. A handsome sophomore who I didn't know came up and put his arm around Darcy. He had a carnation in his hand, and I could see the opened note signed by her. She politely said bye and the two went off with their arms around each other.

Where was Theresa when I needed her? A quick kick in the groin would have felt ten times better than the pain I was feeling at that moment.

I never found out who actually sent me the flowers with no message or signature. I thought it was Karen, the nice young lady in my math class. But when I asked her...she said it wasn't her. I wrote a lot in my high school days with the school paper and some short stories. Darcy was my muse...in other words, somebody that in my mind I would write to, like she was my only reader, and somehow she would be impressed with what I was writing. She was my inspiration. Later on I found out that Darcy never read the school newspaper or anything that I wrote. What happens when your muse doesn't read your writing? It's like the question about the forest and the tree.

My best consolation, I guess, before I let you go today, is that love did eventually find a way into my life and I've celebrated many wonderful Valentine's Days since. Which goes to show that there is hope, even when the prospects of love look hopeless sometimes.